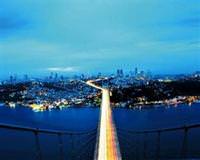 Minister of Transportation Habib Soluk has announced that they have received six conditions of contract requests for the upcoming tender for the building of Istanbul’s third bridge over the Bosporus Strait by 12 firms, half of which are foreign-owned.

Minister of Transportation Habib Soluk announced that he has received 12 firms' conditions of contract request for the upcoming tender for the third bridge to be built over the Bosphorus in Istanbul.
Soluk states: "The third bridge project will also include a railway line. If we consider the entrances and exits to be east-west, then 2x4 will be highway and 2x1 railway. Right now, six foreign and six national firms, totaling 12, have purchased the conditions of contract for the upcoming tender. Amongst the firms that have purchased the tender specifications, there are companies from Russia, France, Italy, Spain and Austria. We believe that more conditions of contract will be requested. This is one of our projects that is at least as significant and costly as the Istanbul-Izmir highway project."
WE HAVE REACHED AN AGREEMENT WITH THE MUNICIPALITY
Soluk also mentioned that the contract liabilities signed between the municipalities and companies on the country's half-finished metro systems have come to an end and that they have also completed fixation of the projects and stated; "We have reached the final stage for the Keçiören-Gar and the Kızılay-Ümitköy metros. We will be able to announce the metros' tenders as soon as the Council of Ministers rules on the matter in the upcoming week."
Stating that the cost for the remaining metros in Ankara is 3.171 billion liras, Soluk says "as long as there is no hitch in the tender process, then they will be completed in two years from the handing over of the metro location."
Soluk also stated that the costs involved with the metros in Istanbul are not definitive as of yet, and goes on to state that that for the Ankara Metro Line, which will be handed over to the Ministry of Transportation, they will need 3.2 billion liras for its completion. Soluk states that as long as there are no complaints or cases filed, the Ankara Metro will be completed within two years time of handing over the location.