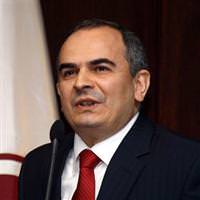 Turkey's central bank raised lenders' required reserves on Thursday in a surprise move that boosted government bonds and pared rate hike expectations, and which markets took as a clear statement of intent from its new governor.

The rise in reserve ratios -- this time on dollar as well as lira deposits -- was the fifth since November under a policy of looser interest rates together with tighter banking liquidity aimed at cooling a domestic credit boom without prompting speculative capital inflows.

"The Committee has indicated that raising reserve requirements on short-term foreign exchange and Turkish lira liabilities would contribute to containing macrofinancial risks by rebalancing external and domestic demand," the bank said.

It was the first meeting under Governor Erdem Basci, previously deputy governor, and seen as the author of the experimental policy mix, which has surprised markets.

Analysts said the message from the policy council was a statement of his intent.

"With this move, the new governor of the central bank wants to send out the message that he is still prepared to do whatever it takes to make sure the "unorthodox" policy response ... works," said analyst Tim Ash at Royal Bank of Scotland.

The bank has raised required reserve ratios on lira deposits five times now since last November, but Thursday's rise was the first move on the foreign currency rate since last September.

Of 18 analysts polled by Reuters, all forecast the bank would leave rates on hold for a third month and keep banks' reserve requirement ratios on hold after a steep hike last month.

The policy is a response to economic growth of 8.9 percent last year, driving up risks of higher inflation and exacerbating Turkey's long-term problems with a high current account deficit.

By lowering interest rates -- by a total of 75 basis points since last December -- the bank hopes to ease the inflows of cash which drove the current account gap to a record high of $48.56 billion, or 6.6 percent of GDP, in 2010 and threaten to increase it further in 2011.

But by doing that it risks letting inflation out of the bag, hence the tightening of the reserve ratios, which forces banks to hold more capital instead of lending it to consumers.

Imports are still growing at twice the pace of exports and loans at an annual 35 percent, compared to the 20-25 percent the bank has said is financially sustainable.

Turkish annual consumer inflation, however, hit a record low in March of 3.99 percent, well below the bank's year-end target of 5.5 percent, quelling some fears that the bank threatened to fall behind the curve with its unorthodox policy.

But continued high oil and commodity prices and a closing output gap signalled the risks to inflation are mounting.

The bank said inflation would end 2011 above 5.5 percent, but its bi-monthly survey of analysts forecasts showed year-end inflation expectations much higher at 6.9 percent.

Since early March the lira has regained almost all its losses since the new policy was introduced. Most analysts welcome the strengthening as a foil to inflation.