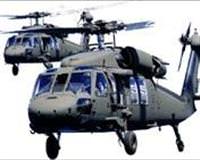 Turkey has awarded U.S. firm Sikorsky a contract on Thursday worth $3.5 billion to supply 109 military helicopters, with the possibility of nearly 500 more over 10 years.

"At first stage, 109 helicopters will be supplied, but this can increase up to 600 helicopters during the 10-year term of the project," Gonul said.

"The project will be worth around $3.5 billion. The schedule of supply will be determined in the coming period," he added.

He said Turkish aerospace firm TUSAS will produce several parts for the helicopters.

The helicopters, which would be used by Turkish armed forces and the police, are part of a drive to modernise the country's defences.