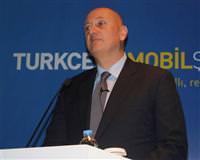 Turkey's leading mobile company Turkcell said on Friday its annual general meeting on Thursday had not approved its dividend proposal, after a failed bid to oust the board chairman.

TeliaSonera , which has a 37 percent stake in Turkcell, had attempted unsuccessfully to remove the chairman at the AGM. Trading in Turkcell shares in Istanbul was subsequently suspended before the opening of trade on Friday.

Sources said another shareholder, Altimo, had abstained in other AGM votes after the bid to oust the chairman failed.

Ahead of the meeting, TeliaSonera said it would try to remove Coiln Williams because they do not feel he is fulfilling his function as an independent board member.

The Nordic telecoms company has also started a law suit against him.

"The management board's proposal of a 75 percent distribution of 2010 profits was not approved," Turkcell said in a statement to the stock exchange.

It said the company's 2010 balance sheet and profit and loss accounts were also not approved.

Turkcell is controlled by Cukurova, a Turkish holding company which has only a 14 percent stake in the company.