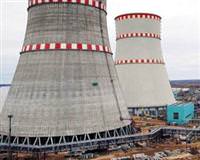 Russia has introduced the identical nuclear power plant to be built in Akkuyu to members of Turkey’s press. With a security technique of internal layers, similar to a matroyshka doll, the nuclear power plant is designed to withstand a nine magnitude earthquake.

As preparations ensue for the building of a 20 billion dollar nuclear power station in Mersin's Akkuyu district by Russia, the leakage suffered by the Fukushima plant in Japan has once again brought the issue of safety to the agenda. Russian officials state that the nuclear power plant to be built in Akkuyu will be able to withstand an airplane crashing into it or a nine magnitude earthquake as it will be a third generation build and the world's safest nuclear power plant.
ABSOLUTELY NO HARM TO THE ENVIRONMENT
Announced that the plant scheduled for Akkuyu will be similar, Russian officials opened the doors to the Kalinin Nuclear Power Plant (KAES) built near the Udomlya residential district of the Tver region, located 350 kilometers' distance from Moscow to members of the Turkish press. Construction of the nuclear power plant first began in 1974 and the fourth reactor is anticipated to become active by the end of the year. While members of the press toured the plant, three reactors actively provided nuclear power. The nuclear power plant, which does not pose any problems in regards to the environment, produces virtually no environmental pollution. In addition, the nuclear power plant has increased the population from 5,000 to 40,000.
Not a single malfunction recorded in 27 years…
KAES Chief Engineer Mihail Kanışev explained to press members that the power plant to be built in Akkuyu will include four safety precautionary measures. The reactors will have three passive security systems which will automatically go into effect should the electricity get shut down completely. In the case of an accident, absorption, natural circulation and cooling will be initiated immediately. Personnel will not be required to ensure the security systems go into effect. The identical system is being used in the nuclear power plant being built in China as well as for the plant planned for Akkuyu.