Ronesans sets price for up to $374 million IPO 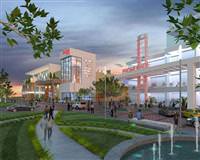 Turkish commercial real estate firm Ronesans is offering its shares for between 5.0 and 6.4 lira each in a planned Istanbul listing next month which could raise as much as $374 million.

In a statement which confirmed what a source close to the deal earlier told Reuters, Ronesans also said on Tuesday this range would give it an equity value of between 1.55 billion lira ($1 billion) and 1.98 billion, including new capital to be raised in the offering.

Ronesans, or Renaissance as it is known in English, plans to list a stake of around 25 percent, made up of 71.5 million new shares as well as 6.2 million existing shares being sold by parent company Ronesans Holding.

At the top of its price guidance range, the offering will raise around $325 million, rising to $374 million if a 15 percent overallotment option is exercised.

The company, which operates in Turkey and Russia and focuses mainly on developing and investing in shopping centers and offices, plans to use the proceeds from the sale of new shares to buy new land and properties.

The current estimated value of Ronesan's properties was 2.2 billion lira, Chief Executive Cenk Arson had told reporters on Monday, adding the company planned a 700 million euro investment in the next three years.

The offering, being run by Credit Suisse, Deutsche Bank and Garanti Securities, is expected to be completed by mid May.

Around 70 to 80 percent of the shares were expected to be sold to foreign investors, Arson said.

Despite a choppy start to the year for initial public offerings (IPOs) in Europe, Istanbul has seen some successful floats including a 400 million lira offering by cash-and-carry firm Bizim (BIZIM.IS), whose shares are trading around 18 percent above their 25 lira listing price.