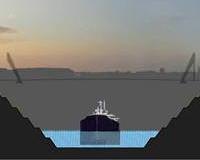 Prime Minister Erdoğan's ‘crazy project’ involving the creation of a second Istanbul strait and referred to as Kanalistanbul, will have four times the capacity to house ships as the Panama Canal and aims to provide access to sea traffic of 150-160 ships daily. The canal is anticipated to bring in at least five billion dollars in revenue a year.

Yesterday, Prime Minister Erdoğan announced the long awaited 'crazy project' for Istanbul.
The Kanal Istanbul Project, which involves creating a water passage through Istanbul, will provide a significant contribution to the economy just as much as it will be a new feature for the city. Announcing that approximately 150-160 ships are expected to pass through the canal each day, Prime Minister Erdoğan states that from ship traffic alone Kanal Istanbul stands to reap between five to six billion dollars in the worst case scenario.

THE COST OF WAITING
A similar water passage; the Panama Canal, which hosts approximately 40 ships to through traffic, rakes in up to 1.5 billion dollars on average. The Suez Canal is slightly different, with 54 ships passing daily; the revenue earned can go up to four billion dollars. The view of ships waiting along the Bosphorus Strait will be a part of history with the Kanalistanbul Project. It is this traffic along the Bosphorus which will result in ships, which already pay an insignificant price to cross, to take preference in the new channel. The reason behind this is that even in the lowest season for commercial ships, it costs 30,000 dollars to wait for one day. In the high season for freight and commercial ships, that cost can go up to 120,000 dollars. According to Chamber of Maritime Trade Assistant Chair Halim Mete, "In terms of maritime, this project provides a number of significantly positive advantages. Fifty-thousand ships pass annually along the Bosphorus. This project, which is planned to be larger scale than both the Panama and Suez canals, will be approximately 25 meters deep and 300,000 dwt, thereby capable to allow access to the largest ships in the world. This project appeals to us."


"NO PROBLEM WITH RESOURCES"
Noting that Turkey is both strong enough to successfully realize this project, but also has the determination to do so, Erdoğan states; "There is no issue regarding resources. We are also not restrained by the project being funded entirely from national resources. There are a variety of resources as it is now possible to also utilize Build- Operate or Build-Operate-Transfer systems. This is because Turkey is a country of stability and security. As long as there is stability, entrepreneurs comfortably enter the market. Turkey more than deserves to enter into the year 2023 with this scale of a grand, crazy and amazing project.

"COST TO PASS MAY BE CONTESTED BY MONTREUX"
The initial reactions to Kanal Istanbul, which the Prime Minister himself has referred to as a 'crazy project' which he announced just yesterday, have already begun to come in. TÜRKSAM Vice Chairman Dr. Celalettin Yavuz, points out that the most significant issue to arise in regards to the Montreux Convention is the cost of passing through the strait. Yavuz states that in regards to military ships passing, the Montreux Convention will most likely not be brought to the agenda. Reminding that in accordance to the Montreux Convention, there should not be a charge for crossing through the strait, Yavuz states that only those requesting a pilot pay a fee. Mentioning that the approval of the 22 nations that signed the agreement will also need to be received, Yavuz states, "What matters in transportation is cost. If transit is less expensive somewhere else then they may veer towards that option, however it cannot be forced." According to Yavuz, the fact that passing through straights has been arranged through an international agreement and do not require payment, means that should a price be charged for passing through the canal, then ships may still prefer to pass through the Bosphorus. Therefore what matters is if the new canal is not less expensive for ships to pass through then those wanting to continue to pass through the Bosphorus cannot be stopped from doing so , otherwise according to Yavuz, the Montreux Convention will come into play.