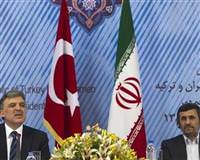 The United States is concerned by Turkey's growing trade ties with Iran and has warned Turkish banks against dealing with blacklisted Iranian counterparts, a senior U.S. Treasury official said Wednesday.

Turkey says it is complying with U.N. sanctions imposed last year, aimed at persuading Iran to become more open about its nuclear program to allay suspicions in both the West and Middle East that it is building weapons.

Though a member of NATO, Turkey opposed the imposition of this fourth round of U.N. sanctions on fellow Muslim Iran.

There are concerns in the West that Turkey could prove a weak link in efforts to throttle the Islamic Republic's access to the global financial system.

Cohen also urged Turkey to observe the United States own set of sanctions, warning that banks involved in significant transactions with proscribed Iranian counterparts risked being frozen out of the U.S. financial system.

Addressing a news conference after holding two days of talks with government officials and bankers, Cohen said Turkish banks had to be on guard against Iran exploiting and abusing financial relationships in order to support its nuclear proliferation efforts.

He said Turkey's support for sanctions was particularly important, given its position as a neighbor of Iran and a leading country in the region.

Another U.S. official came with a similar message last year.

Prime Minister Tayyip Erdogan's government has built friendly relations with Iran and bilateral trade has expanded markedly since the AK Party came to power in 2002. Last year trade climbed to $10.7 billion compared to around $1 billion in 2000.

Cohen specifically warned against dealings with branches of Iran's Bank Mellat in Turkey.

"One of the issues that we discussed in my meetings was the importance of isolating Bank Mellat entirely including its branches here in Turkey," Cohen said.

The United Nations has only blacklisted two Iranian banks while issuing warnings over two others, but the United States and European Union, which has also implemented sanctions on Iran, have listed more.

The U.S. Treasury Department has blacklisted 17 Iranian banks, making it illegal for any bank that does business in the United States to have contact with those institutions.

Cohen said he had no knowledge of reports that India was considering routing payments for oil purchased from Iran via Turkey to avoid its own financial institutions being tainted.

"As trade relationships expand, the risk of abuse by Iran expands at the same time," he said.