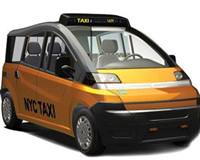 With three carmakers vying for a $1 billion contract to supply New York City with new taxis, Mayor Michael Bloomberg on Friday said the choice will be based on safety, reliability and passengers' convenience.

Turkey's Karsan hopes its offer to assemble the cars at a new Brooklyn plant -- and use union labor -- will give it an edge over rivals Nissan (7201.T) of Japan and Ford Motor Co (F.N) in winning the 10-year contract. Both Nissan and Ford would build the cars at overseas plants.

Bloomberg, a political independent, wants the new taxi to be green and sport an "iconic design" identifying it with New York City.

"You've got to look at how much experience companies have in building cars; what do you do if after two years the wheels start falling off?" Bloomberg asked rhetorically on WOR radio.

"This is data-driven; it's a nice thing if it's built in Brooklyn ... but not at the expense of getting the right car," he said. "If it were tied, yeah, sure, these things matter," he concluded. The Bloomberg administration will choose the winner.

The Turkish vehicle also is the only one that has a ramp for wheelchairs, an important consideration in protecting the legal rights of disabled people. But Bloomberg suggested that the city might not need to equip all of its taxi fleet with cars that can handle wheelchairs.

Taxi drivers are pushing for a fare hike because gasoline prices have topped $4 a gallon. Bloomberg said he was sympathetic to that request, but the city must be sure that drivers are not refusing to take fares to the outer boroughs.