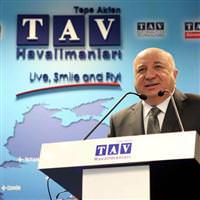 TAV runs airports in Turkey, Georgia, Tunisia and has been eyeing a Medina airport tender due on June 5.