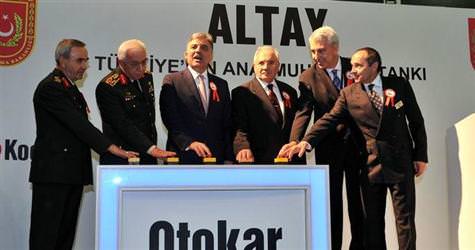 An agreement was signed for Turkey’s first national tank during the IDEF'11 Fair. The nationally-produced tanks will contain a system that is able to distinguish between friend or foe.

President Abdullah Gül conducted the opening for the IDEF'11, the 2011 International Defense Industry Fair on Monday in Istanbul. The indigenous tank, entitled Altay, and the Unmanned Aerial Vehicle (ANKA) made their mark on the fair. An agreement was signed between the Undersecretariat of the Defense Industries and (SSM) and Aselsan regarding the manufacturing of the national Altay tank. The contract was signed at Aselsan's International Defense Industry Fair, IDEF 2011, for the Altay tank, which will contain a radar system able to discern between friends and enemies. Undersecretary for the Defense Industry Murat Bayar, speaking at the signing ceremony, states, "There will not be a single product used in the building of the national Altay tank."
In this year's IDEF'11, 621 domestic and foreign companies from the defense industry sector from a total of 48 countries are on display at the International Defense Industry Fair, which is being held up until May 13th at the Tüyap Fair and Congress Center. President Abdullah Gül, who also expressed interest in the fair, ordered 360 Glock brand weapons for his security detail.