Groundwork for Izmir’s ‘crazy project’ to be laid on Sunday 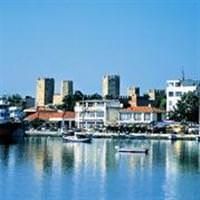 This weekend, Izmir will lay the foundation for its own ‘crazy project’ the Çandarlı Port. Projected to be one of the world’s largest ten ports, the port will be able to dock six mega ships at the same time. In addition, with this investment, Turkey’s container capacity will increase threefold.

This Sunday, the groundwork is being laid for the first for a number of mega projects the AK Party has included in their election manifesto. Once the infrastructure is in place, the Çandarlı Port will operate according to a build-operate-transfer model. With the capacity for six mega ships to dock simultaneously, the new port will become the face of Turkey for Europe, while also harboring a container center that will triple the nation's current capacity.
The Çandarlı Port will be connected to both the highways and the railways and when it goes into effect; it will have three times the capacity of Turkey's current total capacity of 57 million tons of containers. The Çandarlı Port alone will have a 120 million ton capacity for containers.
The Ministry of Transportation felt the need to build a new port due to the limited capacity of the current Izmir Port due to alluvium affecting the water's depth and therefore decided to build the new mega Çandarlı Port.
One Billion Lira Project…
Initial feasibility and the environmental impact assessment have been completed for the mega port, and with public resources, jetties will be built to provide road connections. The 360-million lira infrastructure tender has been held and once completed; the port will be built according to a build-operate-transfer model. As a result, the total investment is speculated to reach one billion liras.