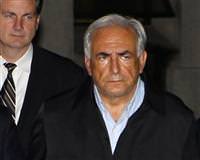 The shock arrest of the head of the International Monetary Fund may force the world's power brokers into a frantic search to find his replacement.

Hours after New York police charged Dominique Strauss-Kahn with the sexual assault of a hotel maid, the IMF said it had appointed John Lipsky, the fund's No. 2, to the position of acting managing director.

IMF officials explained Lipsky often runs the financial institution when the managing director (MD) is away and said it remained "fully functioning and operational."

But the announcement did not mask concerns among some high-ranking IMF board officials about a possible leadership vacuum, especially as Lipsky only last week said he planned to stand down in August when his term ends.

That could leave the world's lender rudderless just as it is immersed in efforts to fix the euro zone's debt debacle and faces the massive task of helping steer the global economy away from the kind of policies that triggered the crash of 2007-09.

"Europe is on fire," one board official told Reuters. "It's a good idea to have made Lipsky acting MD but how long will this go on for?"

Several officials said it would be important for the board to quickly convey its confidence in Lipsky's ability to run the IMF without Strauss-Kahn.

Lipsky, an ex vice chairman of JP Morgan Chase & Co., was due to meet with the 24-member IMF board on Sunday to brief them on developments regarding the arrest of Strauss-Kahn.

But the IMF said the meeting had been postponed "pending further developments in New York." Strauss-Kahn was expected to go before a New York court on Sunday. His lawyer said he will plead not guilty.

The IMF board, made up of representatives from IMF member countries including major shareholders like the United States, France, Germany, China and Japan, has the authority to appoint and to dismiss the managing director.

While the 62 year-old Frenchman's experience, charisma and appetite for policy gambles helped the Fund recapture a central role in global finance since he took over in 2007, the latest incident could prove too much for the IMF's member nations, even if he is cleared of the criminal charges.

In 2008, the board cleared Strauss-Kahn of abuse of power over a brief affair he had with a female IMF economist but warned him against any further misconduct. Strauss-Kahn on that occasion apologized publicly for an "error in judgment."

Several senior IMF sources have told Reuters they had lingering concerns after the incident about whether their boss had taken the lesson to heart.

The magnitude of the financial crisis and the response by the IMF appeared to move the institution beyond the 2008 scandal. Strauss-Kahn won high praise, even from skeptics in the Fund, for his efforts to put the institution at the center of the world's response to the meltdown.

The IMF chief has also been central in galvanizing Europe to tackle its debt woes at a time when European leaders have been divided over supporting huge bailouts for countries such as Greece, Ireland and Portugal.

Speculation had previously been swirling that Strauss-Kahn would leave the Fund to run for the French presidency in 2012. To do that, he would need to declare himself a candidate by the end of July and step down from his job in Washington.

But IMF officials say they had barely begun to think about who the next IMF leader might be.

With an abrupt exit of Strauss-Kahn now looking possible before his term is due to expire in September 2012, the process of finding a new leader may be about to begin and this time it could be more fraught than in the past.

Developing countries have made clear they will challenge the status quo under which the IMF captaincy has traditionally gone to a European while an American heads the World Bank.

Brazilian Finance Minister Guido Mantega fired a shot in April when he told the IMF's steering panel: "It is high time that we make a political breakthrough in departing from the outdated practice."

"The heads of the Bretton Woods institutions should be chosen solely on the basis of an open and merit-based process without regard to nationality."

Dervis was a former head of the United Nations Development Programme and now directs an economics program at the Washington-based Brookings Institution think-tank.

While some in Britain speculated about a candidacy of former Prime Minister Gordon Brown, who served as finance minister for a decade until 2007, his successor, David Cameron, has urged the IMF to look beyond Europe for its next leader.

Current French Finance Minister Christine Lagarde has also been touted by some Europeans as a possible successor. That would make her the first female head of the institution.