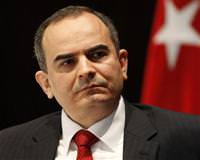 Turkish lenders, subject to painful measures to limit loan growth to 25 percent, have asked the central bank to exclude loans for energy projects that will help reduce Turkey's reliance on imported fuel.

"If there is a credit which helps Turkey import less energy, then this should be excluded," said Acikalin.

Energy-hungry Turkey imports around 95 percent of its crude and gas needs. Higher oil prices this year and lira weakness have heightened the energy bill even further.

Late last year the central bank introduced an unorthodox new policy intended to curb Turkey's spiralling current account deficit, which posted a record high in 2010, and is set to reach more than 8 percent of GDP from 6.7 percent last year.

The central bank has hit the commercial banking sector with five increases to required reserve ratios since last November, taking the reserve ratio on one-month lira deposits from 5.5 percent to 16 percent.

It hopes reducing loan growth would curb a domestic demand boom which has seen imports rise at twice the rate of exports. At the same time the bank cut its policy rate twice and has held it at a record low since January to deter inflows of hot money.

However loan growth so far has showed little sign of slowing, from last year's 34 percent, and still stood at an annual 36 percent as of end-April.

However, this alone would not help tackle the current account deficit and some fiscal measures could follow after a June 12 election, he said. The governing AK Party is set to comfortably win a third term.

Yapi Kredi's first-quarter net profit fell 16.3 percent to 535 million lira. It like its peers, has suffered margin weakness and falling profit as a result of the central bank's strategy.