Ankara also gets a ‘crazy’ project 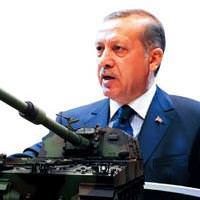 Prime Minister Erdoğan has announced plans for five projects in Ankara. Stating that they will be building Europe’s largest urban medical school, Erdoğan went on to announce plans to build a free trade center, a radar and satellite center as well as a technology city.

Having already released mega plans for Istanbul, namely the Kanal Istanbul project, yesterday Prime Minister Recep Tayyip Erdoğan delivered good news for those in the capital. Attending an award ceremony at the Ankara Chamber of Commerce, Erdoğan revealed plans to build Europe's largest city hospital and medical school campus in Etlik and Bilkent. Erdoğan stated, "Our preparations for the project are complete, as soon as the elections are over work will begin with the dozers. And at these hospitals, my citizens will no longer have to be transported on stretchers outside of the building. Everything will be contained within the hospital blocks and transportation will be conducted on escalators within the hospital. They will have a total 7,000 bed capacity, two general and 14 specialty hospitals. From now on, Ankara will become a medical center." Also stating that they will be completing the highways from Ankara to Niğde, Samsun and Izmir, Erdoğan went on to say that the metro construction, being completed by the Ministry of Transportation will be 44 kilometers in length and will have three metro lines and is a three billion lira investment that is scheduled to be completed in two years' time.
DEFENSE BASE IN ANKARA
Noting the objectives to reach eight billion dollars in revenue from the defense industry by 2016. Prime Minister Erdoğan states, "Six billion dollars of this revenue will be brought in by Ankara. We will be building a 100 million dollar investment in a Space and Satellite Center within the TAİ facilities. We are building a Radar and Electronic Combat Design Center with a 100 million dollar investment nearby Gölbaşı, which will go into operation in two years. At present there are five technocities in Ankara. We will be adding more." Prime Minister Erdoğan went on to state, "We will be building a free trade center in Ankara and our goal for exports from this is three billion dollars." Erdoğan also revealed that he would be announcing the other projects planned for Ankara in the days to come.


'Unusual projects are done by courageous men'
Ankara Chamber of Commerce Chairman Salih Bezci states, "Unusual projects are done by courageous men. We believe in and respect your courageousness. As an architect, the Kanal Istanbul project excites me. I support it because it is the right project. I am of the opinion that the added value to develop from this project will be beneficial to our country."