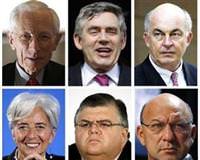 Dominique Strauss-Kahn resigned as head of the International Monetary Fund, the IMF said in a statement, as he faces charges of sexual assault and attempted rape.

Below is a list of potential candidates to succeed the Frenchman at the Washington-based institution. The post has traditionally gone to a European, but with emerging market economies playing a greater role in the world economy, there is rising pressure to throw open the process to all member countries.

German Chancellor Angela Merkel, however, signalled on Monday that she preferred another European at the helm of the IMF, which has become heavily involved in bailouts of struggling euro zone countries Greece, Ireland and Portugal.

Seen as a leading candidate for the IMF post if it goes to a non-European. Kemal Dervis is credited with bringing Turkey back from the brink after a 2001 financial crisis, by pushing through tough reforms and helping secure a multibillion dollar IMF bailout.

Turkey's status as a large emerging market within the European continent could ease widespread concerns by developing nations who feel shut out of the IMF selection process because of Europe's claim to the top job.

Dervis left Turkey to join the World Bank in 1978, becoming vice president of the institution in 1996. He returned home to much fanfare in 2001 as economy minister when Ankara faced failing banks, soaring inflation and a massive currency devaluation.

He is now vice president and director of the Global Economy and Development program at the Brookings Institution, a Washington think tank.

If the post does end up going to a European, French Finance Minister Christine Lagarde, 55, looks like a top candidate and it would make her the first woman to head the institution.

A medal-winning member of France's synchronized swimming team as a teenager and the first female chairman of U.S. law firm Baker MacKenzie, Lagarde won respect in the markets during the global financial crisis and helped promote France's negotiating clout in key forms like the Group of 20.

A flawless English speaker, Lagarde was voted best finance minister in Europe by the Financial Times in 2009.

Counting against her is her nationality. A Frenchman has run the IMF for 26 out of the last 33 years and the Strauss-Kahn embarrassment may make it difficult for Paris to argue that its run should continue. French President Nicolas Sarkozy may also be reluctant to see the popular Lagarde leave in the midst of France's G20 presidency and a year before the next election.

He has the political connections for the role at the IMF and taught monetary policy and international economics in Germany before he was chosen for the Bundesbank in 2004.

Manuel, 55, is well-respected in global financial circles, having served as finance minister of South Africa from 1996 to 2009. He has long been touted as a possible candidate for the IMF and the World Bank, although IMF insiders believe he would be best suited to the poverty-fighting World Bank.

Born in Cape Town under apartheid, Manuel was a founding member of the United Democratic Front and was imprisoned repeatedly by the South African government for political activities in the late 1980s.

Initially sceptical, the investment community watched with approval as Manuel made a swift transition from blue-jeaned activist to dark-suited minister in the 1990s.

Manuel's position in the cabinet was seen as crucial for foreign investors hoping for a stable transition after the ousting of President Thabo Mbeki in 2008.

Carstens, 52, has served most of his professional career as an economic policymaker in his home country, becoming governor of the Bank of Mexico in January last year after serving as the bank's chief economist.

His debut raised questions about the central bank's independence after Carstens pledged to work closely with the government and invited the finance minister to sit in on monetary policy discussions.

He had a successful stint as deputy managing director at the IMF from 2003 to 2006, before returning to Mexico to coordinate the economic policy program of President Felipe Calderon, later becoming secretary of finance.

Carstens obtained a PhD in economics in 1985 from the University of Chicago, a haven for proponents of deregulation and laissez-faire economics.

Working against Carstens is the fact that he comes from the Americas. Robert Zoellick of the United States runs the World Bank and other countries may not be keen to see officials from the same part of the world running the two global institutions.

Fraga, 54, has been described as one of Brazil's most successful central bank presidents, a job he held between 1999 and 2002 during a turbulent economic time.

Investors credit him with easing the effects of Brazil's devaluation of the currency in 1999 by jacking up interest rates to 42 percent and making it harder for consumers and companies to borrow.

He worked for billionaire George Soros for six years as managing director at the Soros Fund Management in New York and just sold his own hedge fund Gavea Investments Ltd to JP Morgan Chase.

Counting against Fraga are his hedge fund connections and his unlikely support by the current Brazilian government.

Canada's Carney, 46, the youngest central bank chief in the G7, has been touted by local media as a possible IMF candidate.

Advocates of Carney, who worked for 13 years at Goldman Sachs, suggest a Canadian would be seen as neutral leader able to build bridges between competing regional interests.

When asked on Wednesday if Carney would be a good candidate, Canadian Prime Minister Stephen Harper said Carney was doing a "wonderful job".

The Canadian central bank has not commented explicitly on the idea, even though Carney is less than halfway through his seven-year term at the bank.

Earlier this week, Carney repeated the view that the IMF chief should be selected on the basis of merit rather than nationality.