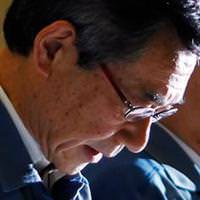 Tokyo Electric Power Co reported a net loss of $15 billion on Friday to account for the disaster at its Fukushima nuclear power plant, marking Japan's biggest non-financial loss, and it warned its future was uncertain.

The company said President Masataka Shimizu, 66, will step down to take responsibility for the disaster and radiation leaks at the plant, making way for an insider, managing director Toshio Nishizawa, 60.

Engineers are battling to bring the plant under control more than two months after a 9.0 magnitude earthquake and deadly tsunami led to the worst nuclear crisis since Chernobyl.

The disaster has triggered a drop of more than 80 percent in Tokyo Electric's share price and prompted the government to step in with a fund to handle compensation claims that some analysts say could top $100 billion. The results were released after the close of trading.

Shimizu, speaking to a packed news conference at its headquarters in Tokyo, bowed at the start of the press conference. Nishizawa, who has worked at the utility since 1975, stood to his left.

"We feel sorry for the victims of the earthquake and tsunami. At the same time we want to sincerely apologize for our nuclear reactors in Fukushima causing so much anxiety, worry and trouble to society," the outgoing president said.

For the business year that ended March 31, the company, commonly known as Tepco, posted a 1.25 trillion yen net loss after accounting for the 1 trillion yen cost of scrapping reactors at the Fukushima complex and writing off tax assets.

Shimizu did not make any public appearances in the two weeks that followed the March 11 disaster, sparking criticism that the

company lacked leadership as it fought to bring the plant under control.

Shortly after, he was hospitalized with dizzy spells as Tepco's share price plummeted and the company lurched close to collapse.

Nishizawa takes over at a time when even the company admits there is major uncertainty over whether it can continue as a going concern.

Since the crisis, it has been supported by banks that offered emergency loans and the government, which promised a bailout to help the firm compensate households and businesses forced to evacuate from around the Fukushima plant.

"I feel a massive weight of responsibility to assume the post when we are in an unprecedented crisis never experienced in the history of the company," Nishizawa said.

"But I decided to take it because I believe it is my mission to challenge head-on this difficult situation."

The spreads have more than tripled since the government's chief spokesman Yukio Edano last week suggested banks waive some of Tepco's debt, raising concern the government may not support the company.

"While a reconsideration of their corporate structure is important, the bigger pressure is how the government will structure their compensation scheme," said Hiroki Shibata, an analyst at Standard & Poor's Ratings. "I don't see any immediate impact from the change in presidents," he said.

Under the state's current rescue plan, Tepco will have to pay the state back, hobbling its earnings for years to come.

The 1.25 trillion-yen loss exceeds the 812 billion yen deficit booked by Japan's biggest telephone utility, Nippon Telegraph and Telephone, in the year to March 31, 2002, and the 795 billion yen loss by industrial conglomerate Hitachi Ltd two years ago.

Tepco did not offer earnings guidance for the current year to March 2012 given uncertainty over how much of its profit will go toward paying the people forced to evacuate.

Tepco has not made an estimate for the likely cost of compensating all victims. Analyst forecasts have ranged from around $25 billion up to $130 billion if the crisis at the nuclear complex drags on.

On Tuesday, Tepco said it aimed to complete initial steps to limit the release of further radiation from the plant 240 km (150 miles) northeast of Tokyo and to shut down its three unstable reactors by January 2012.

In a bid to raise cash, Tepco said it planned to sell assets worth 600 billion yen.

The biggest gem in its asset portfolio is a 7.9 percent stake in KDDI, a telecommunications company that owns Japan's No. 2 mobile phone network. The stake is worth 201 billion yen based on Thursday's closing price.

Its top 10 stock holdings in companies not directly involved in its generating business amount to little more than 200 billion yen combined, while Tepco values the stocks on its books at 310 billion yen.

Most of its investments however are locked up in its generating and transmission infrastructure, with 60 percent of 13 trillion yen in assets on its balance sheet accounted for by nuclear plants and other fixed assets.

Shares of Tepco closed up 2.5 percent at 376 yen, compared with a 0.1 percent fall in the benchmark Nikkei 225 index.