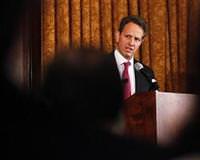 Treasury Secretary Timothy Geithner on Thursday called for an "open process" to select a new head of the International Monetary Fund, although it is expected that Washington will back a European.

The leadership of the IMF was thrown into question by the arrest on Saturday of its managing director, Dominique Strauss-Kahn, on charges of sexual assault and attempted rape. Strauss-Kahn resigned on Wednesday.

"We want to see an open process that leads to a prompt succession for the Fund's new managing director," Geithner, who worked at the IMF, said in a brief statement.

Under a long-standing agreement between the United States and Europe, the IMF top job has always gone to a European, while an American has led its sister organization, the World Bank. The United States also fills the No. 2 post at the fund.

The Group of 20 rich and emerging economies, currently chaired by France, two years ago endorsed "an open, transparent and merit-based selection process," although could not agree that nationality should be explicitly ruled out as a criteria.

Some emerging market nations, which have gained power at the IMF in recent years, have said candidates from their countries should get a shot at the top job.

However, a sense of inevitability grew on Thursday that Europe would retain the post, with French Finance Minister Christine Lagarde seen as the most likely choice.

"The reality is this process is going to result in a European getting this job," a Canadian official said on condition of anonymity.

Although the Obama administration would like to see changes, sources close to the IMF and U.S. Treasury said that in the end it will back a European for the top job so as not to jeopardize its captaincy of the World Bank, which would anger U.S. lawmakers who control contributions to both institutions.

The issue is especially sensitive given that Congress is set to shortly consider funding for the poverty-fighting institution, said Arvind Subramanian, senior fellow at the Peterson Institute think tank and a former IMF economist.

"I think Congress is not prepared to give up control over either institution ... But at some stage, Congress and the U.S. public will have to see what's happening in the world as a whole, that the U.S. isn't calling all the shots," he said.

"The more you rig the institution, the less credible it becomes," he added.

EUROPE LOOKS TO SEW IT UP

European leaders have moved quickly to stake their claim on the job, although China, Brazil and South Africa said the selection process had to be open to all and based on a candidate's qualifications and not nationality.

"The (European Union) is supporting Lagarde and the United States is happy with that because it is not ready to give up the IMF No. 2 spot nor the World Bank," one highly placed source told Reuters. "This time the emerging market economies will fight but they will lose."

Lael Brainard, the U.S. Treasury's point person on international affairs, told a conference that Washington was not backing any one candidate but that a swift transition was needed given the challenges facing the global economy.

The IMF's 24-member board is trying to determine the selection process. The head of the IMF is chosen by simple majority, which means 50 percent of all voting rights. The rights are determined based on the size of each economy and other economic and financial factors.

Together, the United States and European nations hold more than 50 percent of voting power, giving them effective say over who leads the institution.