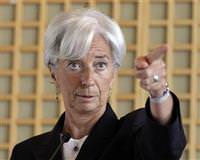 French Finance Minister Christine Lagarde joined the race to head the IMF on Wednesday despite anger in big emerging economies over Europe's "obsolete" lock on the job.

Lagarde announced her candidacy on the eve of a G8 summit after securing the unanimous backing of the 27-nation European Union and, diplomats said, support from the United States and China, making her the overwhelming favorite to clinch the top job in global finance next month.

At a news conference in Paris, she promised to serve a full five-year term if chosen, unlike her three predecessors, and to give top priority to completing reform of the International Monetary Fund to give greater weight to emerging economies.

"The emergence of a number of big players like China, India, Brazil and Russia, for example, just to cite a few, forces us to ask ourselves about their representation at the heart of the institution," Lagarde said.

The 55-year-old former corporate lawyer, who speaks fluent English, has won plaudits for her deft chairing of the G20 finance ministers and communications skills.

But unlike Dominique Strauss-Kahn, who resigned last week after being charged with attempted rape, she is not an economist and may struggle to match his thought leadership over the management of the world economy.

The only other declared candidate is Mexican central bank governor Augustin Carstens, but he has not gathered the backing of the main emerging economies.

Mexican Finance Minister Ernesto Cordero said Lagarde had "all the merits to be appointed at the top of the IMF," but Carstens' best credential was the strength of the Mexican economy, which is growing at 5.5 percent a year.

Brazil, Russia, India, China and South Africa criticized EU officials for suggesting the next IMF must be a European, a convention that dates back to the founding of the global lender at the end of the Second World War.

However, the countries known as the BRICS failed to unite behind a common alternative candidate, leaving the way clear for Lagarde unless she slips on a pending French legal case.

Diplomats said their joint statement seemed mostly aimed at securing a public commitment from developed countries that nationality will no longer be a criterion for selecting future IMF chiefs.

Lagarde said her conscience was clear and she would remain a candidate even if judges at a special court for ministers decided on June 10 to open a full investigation into allegations that she abused her authority in a 2008 arbitration case.

In a nod to the emerging nations' concerns, she said she was a candidate to serve all IMF members, not just Europe, but her experience and good relations with European officials would be an advantage given the IMF's role in the euro zone debt crisis.

Hours before the BRICS' statement was issued in Washington, France's government said China would back Lagarde. The Chinese Foreign Ministry declined comment.

South Africa and Kazakhstan may put forward their own candidates. Asked about South Africa's preferred candidate for the IMF, Finance Minister Pravin Gordhan told Reuters Insider TV the country was still "applying its mind" to the process and would prefer a contender from an emerging market.

Under a long-standing agreement between the United States and Europe, the top job at the IMF goes to a European while an American leads its sister organization, the World Bank. The United States also fills the number two position at the IMF.

European diplomats said Washington had asked the French government about the legal case hanging over Lagarde and had been told it would not be a show-stopper.

The Court of Justice of the Republic, a special court created to try ministers for alleged offences committed while in office, is examining the procedure followed in awarding the 285 million euro settlement to Bernard Tapie, a convicted ex-minister who backed Sarkozy's 2007 election campaign.

"I have every confidence in this procedure because my conscience is perfectly clear," Lagarde said. "I acted in the interest of the state and in respect of the law."

The EU and the United States, which sources in Washington have said will back a European, have enough joint voting power to decide who leads the IMF.

Securing support from some emerging economies would defuse a potentially bitter row over the decision though.

France, which presides over the G20 this year, has made an effort to work with China on key issues for developing nations like global monetary reform and commodity market speculation.

Last week, the head of China's central bank, Zhou Xiaochuan, said the IMF's leadership should reflect the growing stature of emerging economies. But he stopped short of saying its new boss should be from an emerging economy.

Wu Qing, a researcher with the Development Research Center government think-tank in Beijing, said it was plausible that China would support Lagarde as there weren't many qualified candidates from China or Asia in general.

The IMF's board will draw up a shortlist of three candidates and has a June 30 deadline for picking a successor.