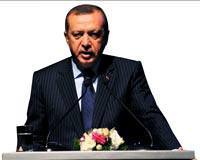 Explaining that in the past eight and a half years, 13.6 thousand kilometers of divided roads have been constructed, Erdoğan states, “By 2023, we will have gained Turkey another 15,000 km’s more.”

Speaking to Turkey's Autobus Federation (TOFED) Prime Minister Recep Tayyip Erdoğan revealed details of the AK Party's road projects. Explaining that at present, there are 19,700 kilometers of divided road, Erdoğan goes on to state, "In 79 years, 6,100 kilometers of divided road were made in Turkey, we however in eight years have built 13,600 kilometers of road, the calculations are obvious. If the same mentality that the AK Party has had been present in the past, Turkey would have had 136,000 kilometers of divided roads." Erdoğan went on to express plans to establish 15,000 kilometers' of divided road in Turkey by the year 2023.
SPEED TRAIN'S A-COMING
Reminding that they have also opened up an Ankara-Eskişehir speed train, Erdoğan, stated "the construction of the Eskişehir- Istanbul line continues. The Ankara-Konya line, which has already been test-driven, is complete. We will be going to Konya by express train on June 3rd. Construction continues on the Ankara-Sivas line. At the initial stage, this line will stretch all the way to Erzincan. We are also continuing to do project work on the Ankara-Afyonkarahisar, Uşak and İzmir line. Emphasizing that the most significant transportation projects are regarding highways, Erdoğan mentioned that they are building three different highways, Ankara- Samsun, Ankara-İzmir and Ankara- Niğde and also noted that the Samsun highway will cost approximately 2.6 billion liras. Erdoğan explained that they have conducted a three-part tender for the project services, and should be completed by 2012, noting that they will be building 381 kilometers of highway, 51 kilometers of connection roads totaling 432 kilometers of construction, which will also include nine tunnels, 13 viaducts and 11 junctions.
A 3.8 BILLION TL HIGHWAY
Erdoğan also revealed details regarding the Izmir highway, set to cost 3.8 billion liras and will be completed in 2012. "We will be building a 535 kilometer road between Ankara and Izmir, consisting of 505 kilometers of highway and 30 kilometers of connections." However, states Erdoğan, the most important project is a highway which will span from Ankara all the way to Edirne. The highway will consist of 285 kilometers of highway and 57 kilometers of connections, totaling 342 kilometers and will also include four viaducts and 11 junctions. Noting that this project will cost two billion liras, Erdoğan states, "God willing, we will also complete the Habur leg and therefore this country will have gained a direct connecting road from Edirne to Habur."