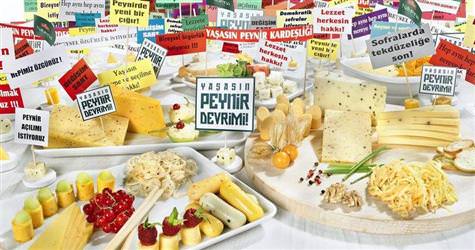 The fame recovered from cheese embedded in the Anatolian culture, will offer a revival for Turkish SME’s. The Uşak based Muratbey firm has discovered 247 varieties of cheese and has now set its sights on France.

The first findings revealing cheese production trace back to 2,000 years B.C. in Mesopotamia. The cheese produced during that era is speculated to have been sour and salty in taste and to likely resemble what we call Feta cheese today. In short, it's quite possible to say that the history of cheese in Anatolia spans a timeframe of 4,000 years. However, this tableau of historical prosperity is not reflected in the same region today. Instead, it is France that is most famous today for their selection and quality of cheese.
In Turkey however, the selection of cheeses offered on grocery shelves does not surpass the number of fingers on one hand. Muratbey, which has been producing cheese for over half a century, has been pursuing new discoveries in the world of cheese. Wanting to move cheese beyond being simply a breakfast item, Muratbey has discovered 247 different varieties of cheese, thereby catching up to France, which is regularly considered to be the motherland of cheese. The company made their most recent foray in 2010. By adding 77 additional products to the firm's previous selection, they have practically conducted a revolution of taste when it comes to Turkish cheese making. These newly added products, marketed under the brand Naturena, have secured the firm an even deeper spot within the sector.
CONTINUING WITH NEW DISCOVERIES
Muratbey Gıda's Chairman of the Executive Board Necmi Erol has been in the cheese business for over 40 years. Explaining that throughout this period of time, they have always tried to be innovative when it comes to cheese, Erol states that they are also trying to change the perception of Turkish consumers, which are generally drawn to purchasing the most inexpensive cheese.
Also mentioning plans to expand their retail chains with appropriate partners in the upcoming period, Erol states, "Muratbey products can be found almost everywhere throughout Turkey. We are extremely competitive with our Naturena group. At this point, we have acquired an important market share in the sector."
OPENING TO THE WORLD MARKET
MURATBEY'S adventures in innovation have not gone unnoticed by other nations. The firm will soon begin exporting to the Middle East, the Turkic Republics as well as to the United States while also continuing to research new markets to branch out to. According to Erol, "Our new flavors were liked. Soon we will be spreading out to wider international arenas."