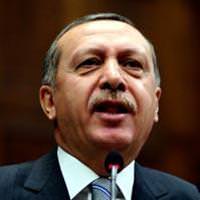 Prime Minister Erdoğan has announced plans for 22 additional projects for Istanbul, Izmir and Diyarbakır. In time, Diyarbakır will have a civilian airport and a stadium with the capacity to host 30,000 spectators. A series of new tunnels and ports will be built in Izmir. Traffic in Taksim Square will be directed underground.

During a 'Türkiye Hazır Hedef 2023' conference, Prime Minister Recep Tayyip Erdoğan announced plans for three projects in Istanbul, 13 for Izmir and six projects planned for Diyarbakır. Explaining that with these projects, Diyarbakır's appearance will be transformed, Erdoğan states that they will also be turning Izmir into an important international commercial, industrial and tourism city.
STADIUM FOR 30,000 TO BE BUILT
According to the information relayed by Prime Minister Erdoğan, the historical city walls in Diyarbakır will be repaired. The city wall, which is the product of 500 civilian architects, will be repaired in congruence to their original structure. In order to discourage the development of shanty towns, Turkey's Housing Administration, or TOKİ, will begin an urban transformation program in Diyarbakır. A stadium for 30,000 spectators will be built as well as 1,272 new residences.
A CIVILIAN AIRPORT SOON TO COME
The civilian and military airport in Diyarbakır will be divided. A new civilian airport will be built in Diyarbakır. Diyarbakır will also gain a new residential area, which will be a cohesion of greenery and architecture. All structures will be built using Diyarbakır's indigenous basalt stone. For the construction of the single and two-story structures, close attention will be paid to the region's climate. Designated picnic areas will also be developed in the region.

TAKSIM HEADS UNDERGROUND: According to project plans, vehicle traffic from Tarlabaşı Boulevard to Cumhuriyet Boulevard surrounding Taksim Square will now be directed underground. In addition, the vehicle access roads in front of the AKM center and surrounding the Taksim Republic Memorial will also be transposed underground. The project will be completed in 15 months time and traffic will not be disrupted.
ARTILLERY BARRACKS TO BE BUILT: Built during Sultan Selim III, the Taksim Artillery Barracks will be built where the current Gezi Park sits. The center section of the buildings will be used as a park and the lower level will be transformed into a parking lot.
TWO CITY HOSPITALS: Two city hospitals will be built on the European and Anatolian sides of the city.
NEW MODEL FOR YASSIADA AND SİVRİADA: The issue of Yassıada, where Adnan Menderes was tried and Sivriada will be revisited. Both islands will be made into symbolic islands. Museums and libraries will be built. In addition a mega congress center and hotels will also be developed.

IZMIR TO GET TUNNELS: The Sabuncubeli tunnel from Izmir to Manisa will be built. The Bay Crossing Project, given the name İzkaray, will connect the two end points of Izmir. A 4.5 kilometer bridge and a 1.5 kilometer long sunken tunnel will be built in Bostanlı and İnciraltı, respectively. The Konak tunnel will also be built.
A 27 KILOMETER METRO: Highways connecting Izmir to Ankara and Izmir to Istanbul will also be constructed. Four 27- kilometer-long metro lines will be built in Izmir's city center. The double line high-speed train on the Ankara, Afyonkarahisar, Uşak, Manisa and Izmir route will be built in two stages.
THE ÇANDARLI PORT WILL BE IN THE TOP TEN: With the Çandarlı Port, Izmir will become one of Turkey's most significant logistical bases. This port will be one of the world's largest ten ports.
A 3.8 MILLION PASSENGER CRUISE PORT: A mega cruise ship port will be built in Izmir. The port will be able to receive three million, 800,000 passengers yearly. There will be nine yacht marinas built. The Ephesus historical port, will be revived as it was used in history.

HIGHWAY IS COMING: The Diyarbakır-Şanlıurfa Highway Project will begin in Edirne and will continue nonstop to Ankara. When the Ankara-Niğde and Şanlıurfa-Habur sections are completed, there will be a highway line spanning from one end of Turkey to the other.
AN 837 MILLION SİLVAN PROJECT: With the Silvan Barrage, a 2,450,000 decare agricultural area will be irrigated. With this irrigation system, farmers will incur 735 liras annually in extra revenue. When considering the 102 million lira energy revenue, this means the contribution to the countries' economy will be 837 million. The project will also provide 318,000 jobs.
TWO CITY HOSPITALS TO BE FOUNDED: Diyarbakır will also be getting two urban hospitals. The Kayapınar Şehir Hospital will consist of one general and seven specialty hospitals. The 500-bed general hospital will have seven specialty hospitals added on. The total bed capacity will be increased to 1,630. A second hospital, with a 600-bed capacity will also be built in Yenişehir. This hospital will consist of a 200-bed general hospital and a 400 bed maternity and pediatric hospital.