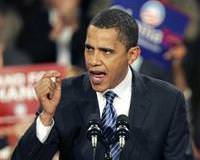 Obama, whose political prospects have suffered from persistently high unemployment and ballooning U.S. debt, has pinpointed the euro zone crisis as one foreign "headwind" hitting the U.S. economy.

After a meeting with German Chancellor Angela Merkel, he stressed the importance of German "leadership" on the issue -- a hint that he expects Berlin to help -- while expressing sympathy for the political difficulties European Union countries face in helping a struggling member state.

"I'm confident that Germany's leadership, along with other key actors in Europe, will help us arrive at a path for Greece to return to growth, for this debt to become more manageable," Obama said.

"But it's going to require some patience and some time. And we have pledged to cooperate fully in working through these issues, both on a bilateral basis but also through international and financial institutions like the IMF."

Merkel, under political pressure at home to avoid being the financial savior for other struggling European countries, said Germany understood its role.

"We've seen that the stability of the euro as a whole will also be influenced if one country is in trouble," she said. "So we do see clearly our European responsibility and we're shouldering that responsibility, together with the IMF."

With U.S. unemployment at 9.1 percent, Obama has blamed outside forces for impeding the economy, including high fuel prices, the earthquake in Japan and the euro zone crisis.

"America's economic growth depends on a sensible resolution of this issue," he said. "It would be disastrous for us to see an uncontrolled spiral and default in Europe because that could trigger a whole range of other events."

Obama said Greece had to make structural reforms and instill greater transparency in its economy.

But his main message was aimed at EU countries -- and, by default, wealthy Germany -- to step up to help Athens.

The euro debt problems dominated discussions between Merkel and Obama, who also touched on foreign policy issues such as the wars in Afghanistan and Libya.

Obama welcomed Merkel at a formal ceremony on the White House lawn with firing cannons and military musicians adding to the pomp of an official visit.

Later in the evening Obama and his wife Michelle hosted Merkel and her husband, Joachim Sauer, for a state dinner, where the president awarded her the "Medal of Freedom" -- the highest U.S. civilian honor.

Obama noted the event, held open-air in the Rose Garden to take advantage of a warm Washington evening, was the first such state dinner of his presidency for a European leader.

In public the two leaders referred to each other by their first names and joked about looking different from their predecessors. Obama is the first black U.S. president and Merkel is the first female chancellor of Germany.

Their show of partnership did not mask differences between them -- and Libya has been one of those issues in the past.

The United States cautiously endorsed military action in Libya while Germany confounded its NATO partners by refusing to take part.

Obama said he would expect Germany to help once Libyan leader Muammar Gaddafi was gone and recovery work was needed in the North African country. He thanked Merkel for Germany's stepped-up support in Afghanistan, which he said had freed up other NATO members to be active in Libya.

Merkel, meanwhile, advocated for French Finance Minister Christine Lagarde to take over the top job at the International Monetary Fund, according to a German delegation source. The United States has stayed publicly neutral in the race for that post, saying it wants the best candidate to win.