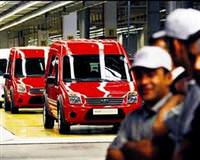 Ford announced a big boost of investment plans at the end of 2010, including a 630 million dollar investment in Ford Otosan, which is now heading towards increasing capacity. The firm’s 320,000 vehicle capacity will be increased to 400,000 and the number of staff will reach up to 9,500.

In October 2010, Ford Otosan decided to make a 630 million dollar investment, and now they have embarked upon increasing capacity. With the investment, Ford Otosan's 320,000 vehicle capacity at the Kocaeli Factory will be increased to 400,000. Along with the capacity increase, the current 8,413 number of employees will be increased by over a thousand new hires to reach 9,490 employees. When Ford reevaluated the plan for their European manufacturing plans according to a product based growth strategy, they also made the decision to widen production volume in Turkey. With the new restructuring, Ford Motor Company plans to increase capacity usage, productivity and to increase the efficiency of investments in the upcoming years, while also aim to protect output elasticity.
Announcing their support for an aggressive product based growth strategy in Europe, Ford Motor Company, is aiming to increase capacity utilization for production efficiency. Ford's objective is to strengthen the company's global product portfolio, by launching at least 20 new or redesigned models in the next three years.
KOCAELİ IS KEY FOR GROWTH
Ford Otosan General Manager Nuri Otay states that the facilities in Kocaeli play a key role in Ford's global commercial vehicle production plans. "As Ford Otosan, 75 percent of our total vehicle sales are in exports. By exporting the commercial vehicles we manufacture to 70 countries on five different continents, we are displaying to the world the engineering talent and quality of Turkish engineers and workers," states Otay.
A TOTAL INVESMENT OF ONE BILLION DOLLARS
Stating that they have announced 2011 as a year for commercial investment, Nuri Otay explains, 'In 2010, we announced that we had embarked on a 630 million dollar investment. We have also decided on a second investment of 205 million Euros for the Transit. We will be investing a total of one billion dollars in order to make new products. Our production capacity will reach 400,000."