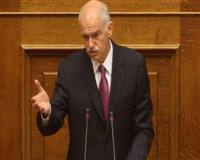 Greece's prime minister said he would form a new government and seek a vote of confidence from his parliamentary group after violent protests against austerity on Wednesday, with Athens teetering on the brink of default.

Senior European Union officials said agreement among the region's governments on a second international bailout of Greece was now unlikely to be reached at a summit next week and could be delayed until mid-July, after they failed to form a consensus on how private investors would share the burden.

The euro sank 1.8 percent against the dollar, heading for its biggest daily drop since early May, and other currencies around the world also fell as investors feared Europe's plans to rescue Greece were falling apart.

In Athens, tens of thousands of angry Greeks massed outside parliament to demonstrate their hostility against draconian measures required to win a second bailout from the EU and the International Monetary Fund.

Senior government sources said Socialist Prime Minister George Papandreou told the leader of the conservative opposition he would be willing to step aside if a unity cabinet agreed on a clear plan to meet the terms of an EU/IMF bailout.

"Prime Minister Papandreou talked with Mr (Antonis) Samaras today and proposed that if the two agreed on a framework of specific commitments for change in the country and the political system and specific targets, he would be willing to stand down from his office," one government source said.

But a source in Samaras' New Democracy party said the conservatives would only take part in such a government if it renegotiated the EU/IMF deal and Papandreou resigned.

A government minister then said a broad renegotiation would at present be impossible, and Papandreou appeared on national television to say he would keep governing through his PASOK party.

"I will continue on the same course. This is the road of duty, together with PASOK's parliamentary group, its members, and the Greek people," Papandreou said. "Tomorrow I will form a new government, and then I will ask for a vote of confidence."

Papandreou did not elaborate on the new government, but political analysts think he may replace some economic ministers in a cabinet reshuffle. In an effort to win parliamentary approval for a package of tax hikes and spending cuts totaling 28 billion euros through 2015, he may soften some of its terms.

PASOK still has an absolute majority in parliament but public support is dwindling, backbench lawmakers are starting to defect and several ministers are unhappy about privatization plans imposed by the international lenders.

Greece is in an extremely weak position to renegotiate its commitments to the EU and the IMF, however, since it faces default on maturing debt in mid-July unless it receives a 12 billion euro tranche of emergency loans.

The tranche is on hold until Athens adopts austerity steps which were demanded after it missed budget targets under its first international bailout, a 110 billion euro ($158 billion) rescue plan launched in May last year.

The European Commission said on Wednesday that it still expected Greece to receive the tranche, but many investors think a default may be inevitable in the long term. The country is in the grip of such a deep recession that economists say it may be unable to start working through its 340 billion euro sovereign debt mountain for years to come.

"Even if you look at the best case scenario, where we get parliamentary approval in Greece and the EU agrees a new aid package, you still have big medium-term issues," said Jacques Cailloux, an economist at RBS in London.

"The political uncertainty is not going to go away, there are implementation risks, privatization risks, you name it."

Shares in Greek banks fell as much as 7 percent on Wednesday because of the political uncertainty, while shares in top French banks tumbled after credit rating agency Moody's said it might downgrade them because of their exposure to Greece.

In Brussels, finance ministers of the 17-nation euro zone argued late into Tuesday night over how to make private bondholders share the cost of Greece's second bailout without triggering even worse financial turmoil.

They had been aiming for a deal at an EU summit on June 23-24, but Slovak Finance Minister Ivan Miklos said on Wednesday that agreement could be delayed until July 11.

A spokesman for German Finance Minister Wolfgang Schaeuble insisted a deal was still expected next Monday, but senior EU officials and diplomats in Brussels said that barring a last-minute Franco-German breakthrough, there was not enough time to resolve the complex issue of private sector involvement.

European paymaster Germany is insisting that banks, pension funds and insurance firms which hold Greek debt swap their bonds for new ones with maturities that are seven years later.

Fearful that this solution would prompt rating agencies to declare Greece in default, the European Central Bank, European Commission and France all favor a softer option in which holders of Greek bonds would be asked to buy new Greek debt as their existing holdings matured.

But credit rating agency Fitch said on Wednesday it would view even a voluntary rollover of this sort as a distressed debt exchange and be forced to lower Greece's rating to "restricted default" once such a transaction was completed. The other major ratings agencies have taken a similar line.

The ECB has said a default would cause it to stop accepting Greek bonds as collateral in its money market operations. This might force European governments to provide more money to support Greek banks, which are heavily dependent on ECB funds.

That could be unacceptable to northern euro zone creditor states such as Germany, the Netherlands and Finland, which face strong opposition among their taxpayers to bailing out Greece.

German Chancellor Angela Merkel will meet Mario Draghi, the anointed successor to Jean-Claude Trichet as president of the ECB, on Thursday in Berlin to try to resolve the impasse. A meeting between Merkel and French President Nicolas Sarkozy is planned for Friday.

In another example of the uncertainty around Europe's efforts to rescue its most indebted states, Ireland, which is receiving an 85 billion euro bailout, said it would seek to impose losses on senior bondholders in nationalized Anglo Irish Bank.

Dublin wants private investors to shoulder part of a 70 billion euro bill for bailing out its banks, but had previously shied away from targeting senior bondholders because of opposition from the ECB.

On Wednesday, however, Finance Minister Michael Noonan said he would enlist the support of IMF officials in trying to persuade the ECB that imposing losses on those investors would not destabilize markets because AIB was no longer a real bank.