We’re better off than Europe! 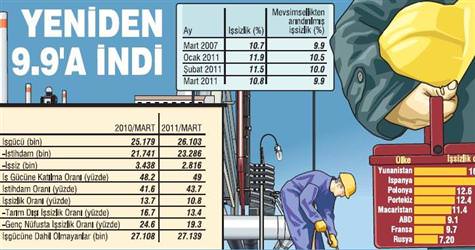 Turkey is winning the struggle against unemployment. In March, unemployment went down to 10.8 percent. When calculating the effects of the season that figure comes down to 9.9 percent. As a result, this means that 48 months later, we are now down to the single digits.

SINGLE-DIGIT 48 MONTHS LATER
With unemployment rates for March down to 9.9 percent, this marks the lowest rate seen since the crisis. In March there was an increase of 97,000 employed, with the number of unemployed dropped to 43,000. The same deseasonalized figures for February, 2011 were 10 percent and at 12.6 percent for the year prior. Experts say that with the seasonal effects factor, the drop will continue and emphasize that we may even see the nine percentile level towards the end of the first half.
1.5 MILLION EMPLOYED
Increasing by one and a half million more people employed throughout Turkey, compared to the same time last year, the total number of employed is at 23.2 million. For this period, the number of laborers in the agriculture sector increased by 589,000 and in all other sectors an increase of 956,000 people was seen. According to the unemployment rate in comparison to the same period last year, 622,000 people less makes the total number at 2.82 million unemployed.