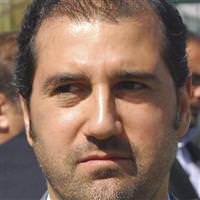 Syrian tycoon Rami Makhlouf, a cousin of President Bashar al-Assad and focus of anti-corruption protests, is quitting business, state media said, in a major concession to demonstrations against Assad's rule.

The announcement came on the eve of weekly Muslim prayers, which have usually witnessed the biggest protests and the heaviest bloodshed of the three-month unrest, and as army units circled two restive towns in the north of the country.

He has been subject to U.S. sanctions since 2007 for what Washington calls public corruption, as well as EU sanctions imposed in May, but repeatedly maintained he was a legitimate businessman whose firms employ thousands of Syrians.

A childhood friend of Assad's who expanded his business since the president assumed power 11 years ago, Makhlouf will channel his wealth into charity and development projects, according to state media.

"As for his businesses, they will be directed so that they ... create jobs and support the national economy. He will not enter into any new project that (brings) him personal gain," Syrian television said.

State news agency SANA quoted Makhlouf as saying he will put his 40 percent holding in Syriatel, up for sale in an initial public offering, with profits allocated to humanitarian work and families of those killed in the unrest.

Syrian rights groups say 1,300 civilians and more than 300 soldiers and police have been killed since the protests broke out in March against 41 years of rule by the Assad family.

United Nations Secretary General Ban Ki-moon said he had spoken to Assad and urged him to halt the violence.

"I again strongly urge President Assad to stop killing people and engage in inclusive dialogue and take bold measures before it's too late," Ban told reporters in Brazil.

Syrian forces, which retook the rebellious town of Jisr al-Shughour near the Turkish border on Sunday, have circled two nearby towns on the main north-south road linking Damascus with the second city of Aleppo.

Army units "have deployed near Khan Sheikhoun and Maarat al-Numaan to ensure the safety" of the highway, SANA said.

Thousands of refugees have fled into neighbouring Turkey, many of them from Jisr al-Shughour, but residents have also reported an exodus from Maarat al-Numaan in anticipation of an army assault there.

Turkish Foreign Minister Ahmet Davutoglu held talks with a Syrian envoy in which he called on Damascus to end the violent crackdown and pass democratic reforms.

"Yesterday I clearly saw the fear in the eyes of the people," Davutoglu said in Ankara, a day after he visited a border camp in Yayladagi, about 20 km from Jisr al-Shughour, and talked to refugees.

Syria says thousands of people have returned to Jisr al-Shughour. But Turkish officials said 8,900 Syrians, many from that town, were still in Turkey. Activists say another 10,000 have been sheltering by the border just inside Syria.

"We are hearing that they are calling for people to return, but we know that we will die if we go back," said a refugee on the Turkish side of the border who gave his name as Ahmed.

Activists said the announcement of Makhlouf stepping down would not put a halt to the protests unless it was part of a wider package of reform.

The Local Coordination Committees said that nightly demonstrations, aimed at circumventing heavy daytime security, continued across Syria, including in the Damascus district of Qaboun, Dael in the southern province of Deraa, Deir al-Zor in the east of the country and Homs to the north of Damascus.