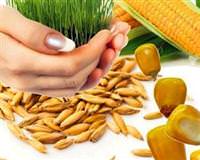 By sheer coincidence, a series of original seeds from Anatolia were found in the Istanbul Mercantile Exchange laboratory. The 50-year-old seeds which have been germinated are expected to save Turkey from external dependence.

The Mercantile Exchange has set up a Seed Bank project with the hopes that these seeds, and an Anatolian legacy, may be brought back to life. Initial findings of the study conducted by Namık Kemal University show that both the corn and oat seeds have germinated. The seeds found in the exchange laboratory are anticipated to significantly save Turkey from external dependence in agriculture.
Istanbul Mercantile Exchange Chairman İslam Ali Kopuz explains that as soon as they discovered the seeds, they collaborated with the Namık Kemal University to bring the issue to the agenda of the Ministry of Agriculture and Village Affairs. "The Ministry promoted the project. Later, the Istanbul Mercantile Exchange Assembly set up a research commission. With the help of officials from the Ministry, we began working on germinating the seeds."
Kopuz explained that with the joint efforts of the General Directorate of Agricultural Production and Development, or the TUGEM Genetic Bank, they have made important steps, and as a result of continuous work, in January of this year, both the corn and oat seeds were observed to have revived and germinated. Kopuz states, "These seeds are our joint cultural legacy. Every extent of sensitivity and means will be used."
FOUNDATION TO BE ESTABLISHED WITH REVENUE
According to Kopuz, plans are to establish an Istanbul Mercantile Exchange Bank Foundation with the revenue acquired from the seeds which will be produced. "With the resources that will be filtered into this foundation, we may veer towards conducting Research-Development activities focused on Turkish agriculture and we may also offer training and scholarships." İTB Seed Research and Development Commission Chairman Ertuğrul Yılmaz states that they are hopeful the other seeds will also flourish.
WE ARE 95% DEPENDENT ON FOREIGN SOURCES FOR CORN
An article published by SABAH's economy page, entitled 'The seeds we have been seeking are found,' explained that 200 bottles of seeds from prior to the GDO era were found and would be used as a healthy source of seeds for Turkey. The first seeds to germinate were corn, which is a product Turkey is 95% dependent on from external sources. With sunflower seeds, our agriculture is based 100 % on imports, which in turn increases interest in the project.
'These are seeds that are familiar with this land'
Bülent Ozan Diren/ Diren Holding Executive Board Member Dimes General Manager states, "These are 50 year-old seeds, they are both familiar with this land and are compatible to this geography. Therefore, I do not think there will be an issue in terms of fertileness. I feel we need to approach this project from a solely emotional perspective. The results will be significant for not only taste and fruitfulness, but also in terms of preventing external dependence."