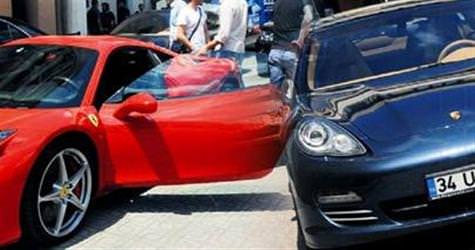 The second mega operation into manipulation of the stock exchange has resulted in 35 arrests, including a number of former football players, as well as the freezing of 45 individuals’ accounts.

Five years after the 'Keriz Silkilemede' bourse scandal, the second largest operation against manipulation in the Istanbul Stock Exchange, or ISE, has resulted in 35 arrests, including a number of prominent figures in the sports world. Veteran football player Mecnur Çolak, former Fenerbahçe goalie and currently serving as Turkey's National Team goalkeeper trainer Engin İpekoğlu, former Fenerbahçe footballer and Turkey's National Team monitoring commission member Şenol Ustaömer', also known as "Küçük Şenol", are amongst the 35 that have been detained.
Meanwhile, the Sarıyer Chief Public Prosecutor has also blocked the accounts of 46 individuals. Technical Director for Beşiktaş Tayfur Havutçu is one of the individuals whose accounts have been blocked. According to Havutçu, "This is slander. We have begun to follow the necessary procedures to set everything straight."
IT ALL BEGAN EIGHT MONTHS AGO
The operation began when a tip was received alleging that former footballer Mecnur Çolak and the Bumerang Investment Joint Corporation Executive Board Chairman and Basketball Federation Supervisory Board Member Mehmet Uğurlu were responsible for manipulating the Istanbul Stock Exchange. Police began working on the case eight months ago, by both technically and physically tracking former footballer Mecnur Çolak and members of his network. According to findings from the investigation, over 1,000 small investors were harmed in the manipulation of shares in the Istanbul Stock Exchange. Specialists form the Capital Market Board aided police in the investigation, conducted on order of the Sarıyer Chief Public Prosecutor.

LUXURIOUS AUTOMOTIVES CONFISCATED
The Financial Department apprehended 35 suspects yesterday in an operation staged in the early morning hours. All of the suspects' bank accounts and bourse shares have been frozen. Forty luxurious vehicles belonging to the apprehended suspects, of makes including Ferrari, Porsche, Mercedes and BMW, have also been confiscated. According to allegations, the group would create activity on company shares trading in the exchange and after raising the value, would immediately sell shares, causing smaller investors to incur over 100 million TL in losses.