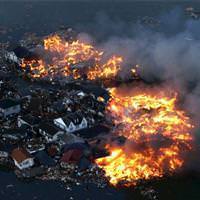 Damage to buildings, roads and ports from a large earthquake and tsunami in March is estimated at 16.9 trillion yen ($209.8 billion), Japan's Cabinet Office said on Friday, at the low-end of the government's previous estimate.

Damage to homes and factories is estimated around 10.4 trillion yen, while damage to rivers, ports and roads is expected to be about 2.2 trillion yen, according to the Cabinet Office.

The estimates don't include damage from nuclear meltdowns triggered after the record earthquake and large tsunami struck the northeast coast on March 11.

The Cabinet Office previously estimated that damage from the natural disaster ranged from 16 to 25 trillion yen. ($1 = 80.545 Japanese Yen)