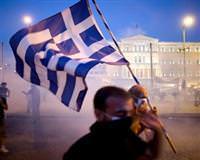 Greece is embroiled in the most complex sovereign debt problem for years as there are so many parties involved and no unified European view, the head of the Institute of International Finance (IIF) said on Tuesday.

"This is the most complex sovereign debt crisis I have ever been connected with, because there are so many players, no unified European view, and the weaknesses of the Greek economy are extraordinarily serious," said Charles Dallara, who has been managing director of the IIF bank lobby group for 18 years and was involved in other sovereign crises.

"The private financial community has to play a part," Dallara said, but added: "It will be exceptionally difficult to align the political, economic and financial stars."

Dallara said radical proposals by France to roll over some Greek debt for 30 years had stimulated debate and some of the proposals were likely to be in the final solution.

Speaking in Istanbul at an event hosted by Turkey's Garanti Bank, he said if Greece's government approves an austerity plan and Europe commits to a further bailout then the International Monetary Fund and others are likely to allow Greece a period of time to sustain its efforts.

Dallara, a former banker who has also held senior roles in the U.S. Treasury, is playing an informal role in the talks to thrash out a solution.

It is familiar ground for the IIF, which represents over 400 firms and was created in 1983 in response to the international debt crisis and aims to help stabilize the industry, including managing sovereign risk.