Arabia’s Survivor is being filmed in Göcek 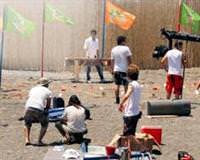 An Arabian version of the popular television reality show Survivor is currently being filmed in Göcek. Filming was kept under wraps for 40 days.

Shot in Muğla's Göcek district, the Survivor series' Arabian edition is being shot in the Aegean province of Muğla's Göcek district. Shooting has been kept confidential in Turkey, which is being promoted with the slogan, 'the country of nature's miracles'. The project, which is being run by a Dubai based television station, involved the building of a large enclosed platform for both children and adult contestants.

Turkey has also made its mark on the show in terms of the games played for rewards as part of the program's competitive concept. At one point, the contestants participated in a hot-air balloon ride in Cappadocia, and then later they parachute jumped in Ölüdeniz. Shooting has almost come to a close, however a variety of other concepts are also being considered for the competition.

A MILLION DOLLAR PRODUCTION
Turkey's Dinamo Istanbul is undertaking production for the competition show. The firm's employees, which have also shot a number of international automotive commercials as well as the promotional film for the King Abdulaziz Airport, spent 50 days on the platform. Eight separate villas were rented out for the 60-member crew. Dinamo's Istanbul partners Arda Şengel and Enis Özkul state that Turkey's geography has been a point of increasing interest for the Middle East. Noting that Turkey's production strength has reached an extremely advanced level, Enis Özkul states, "We have taken on the project's production. This is a million-dollar worth extended adventure which encompasses a number of regions in Turkey."

SHOW'S HOST IS A TURKEY FAN
Noting that the host of the show mentions Turkey during practically every announcement he makes, Özkul states that thanks to him Turkey is being well-promoted. "This is a start. Turkey's production strength is strongly advancing. There may be interesting surprises to come," states Özkul.


ARAB TOURISTS ON THE RISE
Turkey's policy and visa practices of recent years has resulted in the increasing interest of Arab tourists in Turkey. Tourists from Arab countries such as Lebanon, Palestine, Syria and Jordan have especially increased, at a figure toppling at approximately 50 percent. Arab tourists tend to prefer Antalya, Fethiye and Istanbul as destinations.


LAZVİVOR IS COMING SOON
Survivor has also opened the door for similarly themed domestic productions. Mavi Karadeniz TV is one of the first to take a step in this direction. Karadeniz TV is soon to complete preparation to broadcast in 18 different districts. A competition reality show entitled Lazvivor, will have competitors fulfill all of their needs in nature.