Turkey should be alert to inflation risks 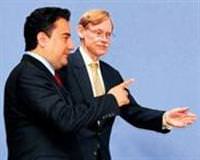 As a fast growing country Turkey should be alert to inflation risks, World Bank President Robert Zoellick said in Ankara on Wednesday.

Speaking at a joint news conference with Zoellick, Deputy Prime Minister Ali Babacan said Turkey should prepare for negative scenarios in case the United States and euro zone were unable to resolve their debt crises.

The country is struggling to contain a record current account deficit, which the IMF now forecasts at 10.5 percent of GDP, up from a previous estimate of 8.0 percent.