S&P says Turkish economy could be set for hard landing 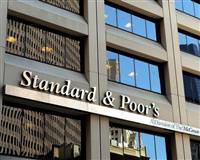 Turkey's economy could be heading for a hard landing and Standard & Poors is watching for measures taken to prevent overheating, Frank Gill, an analyst at the credit ratings agency said on Wednesday.

Gill said there was no risk of a systemic shock to the Turkish economy thanks to the currency regime. Turkey operates a floating exchange rate, unlike during the 2000/01 crisis when a fixed exchange rate system existed.