A start for solar investments 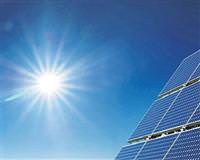 The areas designated for solar energy investments have been determined. Out of 27 provinces, Konya was granted the largest capacity. Investments into solar energy projects are anticipated to surpass two billion Euros.

The state has released a solar energy investment plan, which is one of the most significant objectives in the government's nine item action plan, which also intends "to decrease our external dependency on energy." Highly anticipated by both foreign and domestic investors, Turkey's investment map and electricity connection points for solar energy investments have officially been compiled. The Ministry of Energy has designated the areas conducive for solar energy investments and published the plan in the Official Gazette. According to the plan, investments will be made in 27 different provinces. While the highest capacity was granted to Konya with 82 megawatts of electricity, Van follows with 77, Mersin 35 and Karaman were granted the rights to apply for up to 38 megawatts.
WE ARE EXPECTING INTENSE INTEREST
Responsible for granting licenses to the investing companies, Chairman of the Energy Market Regulatory Authority (EPDK) Hasan Köktaş states that the revealing of the regions applicable for solar energy marks the start of a very important period for both domestic and foreign investors. Expressing expectations of accrued and intense interest by investors, Köktaş states: "In this next stage, when we announce the measurement regulations, companies will begin surveying the regions announced yesterday. We will be announcing a date for licensing applications." Noting that should more than a single company apply for a specific region, then the Turkish Electricity Transmission Company (TEİAŞ) will conduct a competition, Köktaş states, "In this competition, those who offer the highest discounted price on the purchasing price determined in the regulations will be granted connection rights. Therefore, the private sector applications will be determined by both surveys and competition results." While there is a 600 megawatt limit to investments throughout Turkey, license applications may be made for a maximum of 50 megawatts. In order to switch to electricity production following the tenders, it is anticipated that for throughout Turkey, an investment of over two billion Euros may be necessary. It has also been emphasized that once the 600 megawatt capacity investments are completed, authorization will be granted for further investments according to a designated plan.