Protests across Israel against high cost of living 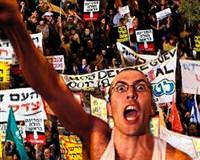 Tens of thousands of people gathered across Israel Saturday to call for lower living costs in an effort to show the government their protest movement has countrywide support.

It all started on July 14th, when a female student was kicked out of her home by her landlord for not being able to pay her rent. The dramatic turn in this young girl's life as she faces living in a tent for her survivals has been the echoing of Israel's long-lived issues of sheltering and social justice and, which was the last straw for many who are now hitting the streets in protest.

The gatherings followed a rally last weekend in Tel Aviv, Israel's commercial capital, in which over 250,000 demonstrators called for economic reform. It was the biggest socio-economic protest the country of 7.7 million has ever seen.

Past demonstrations on such a scale in Israel have usually been over issues of war and peace but Saturday rallies from Haifa and Afula in the north of the country to the resort town of Eilat in the far south all focused on "social justice."

The protests have put pressure on Prime Minister Benjamin Netanyahu, who last week named a 14-member panel of experts led by economist Manuel Trajtenberg to deliver proposals for changes within a month.

The unrest comes despite projected economic growth of 4.8 percent this year and relatively low unemployment of 5.7 percent.

"The gaps between rich and poor have (increased) and I think right now people really feel frustrated because they are working ... in very respectable jobs, but they don't get enough to live their lives and raise their children," Beersheba protester Daniel Eisler told Reuters.

Police spokesman Micky Rosenfeld said some 50,000 had gathered at rallies across the country with the largest number, 25,000, assembling in the port city of Haifa. Organizers and media said at least 70,000 had attended.

Students set up a tent city along Tel Aviv's leafy, affluent Rothschild Boulevard a month ago to protest the high cost of housing and others then sprouted in parks across the country.