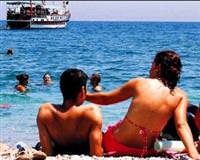 With two million vacations postponed in England, Europe’s biggest tour operators are taking action to save the season. After September, Brits will be able to vacation on the Aegean at the price of two pounds a day.

With the United Kingdom the latest to be effected by Europe's domino effect of the economic crisis, British and Irish tourists are now seeking out cheap vacations.
Thomas Cook, one of Europe and Britain's largest tour operators, has begun offering tours to Turkey starting at two pounds. The purpose of providing accommodation in two to three star hotels along the Aegean is to allow English nationals the opportunity to vacation in Turkey while spending less than they would in a day in their own country, thereby contributing to the nation's economy. The sole requirement for the tours that are predominantly being offered by hotels in Dalaman and Hisarönü is that visitors must book for more than ten days. The Irish based website, www.joe.ie published an announcement that Irish and British tourists will be able to stay in Dalaman for the months of September and October for two sterlings a night. The website states that visitors can stay in Dalaman's three-star hotel Green Star at a price of two sterlings a day, or 24.17 sterlings for two for one week. The Destan Hotel in Hisarönü is offering accommodation at four pounds a night for British nationals staying for ten days or longer, for shorter stays the price is five pounds a night.
'DYNAMIC PACKAGING' DURING CRISIS
Thomas Cook's "dynamic packaging" allows for customers to design their own vacation package. This service of dynamic packaging, which was initiated by mega European tour operators in 2008, when the initial signs of the economic crisis began to surface, allows vacationers flexibility to select their desired airline and hotel, while also retaining the security offered by purchasing a package trip.
THE TARGET IS TRAVELLERS THAT HAVE POSTPONED
England's Minister of Finance Alistair Darling has announced that the country is currently experiencing the biggest economic crisis in 60 years. There has been a 15 percent drop in the first six months of the year in the number of English tourists, which during the crisis have preferred the Aegean region as a vacation destination.
According to figures from England's Ministry of Tourism, two million people have had to postpone their vacations due to the crisis. It was this information that has mobilized tour operators to arrange vacations which will allow tourists to spend less than they would if they had remained in their own countries.