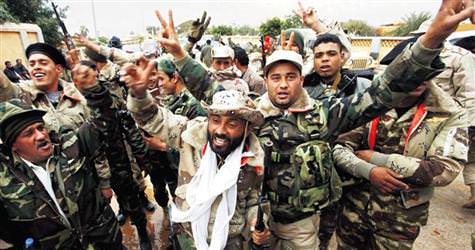 Turkey’s diplomatic efforts in Libya may result in making contractors smile. As soon as the National Transitional Council is handed over the administration, the 1.4 billion dollar debt the state owes to a number of businessmen will soon be paid off.

SABAH assessed the recent developments in Libya with one of the leading figures of the rebel movement, Libyan National Transition Council Member and Tunisia District Representative Hasan Alkari, whom emphasizes that Turkey will have a place of special importance for the new administration. According to Alkari, they will be preparing a schedule for the repayment of debts incurred during the overthrown Libyan leader Muammer Gaddafi's era. Alkari also noted that he discussed the details of this schedule with Foreign Affairs Minister Ahmet Davutoğlu yesterday, during his stay in Benghazi. "Libya has 174 billion dollars throughout the world that is currently blocked. The moment these funds are released, Libya will begin paying off debt. In regards to this matter, one of the first recipient's will be Turkey."
ARAB NAME LIFTED
Alkari also shared information regarding the shape in which the governing of a future Libya will transpire. Stating that the new administration will adopt a republic model, Akkari explained that the terms Arab and Socialist will be removed from Libya's title and the nation will instead be referred to as the Libyan Republic.
THE NEW ADMINISTRATION WILL TAKE OVER
Hüseyin Ersin Takla, the Chairman of the Turkey-Libya Business Council states that the National Transitional Council will address the issue of 1.4 billion dollars of funds Turkish contractors are still owed. Expressing how pleased he is that the opposition in Libya has come out victorious, Takla states; "Before it was unclear who would take charge of this issue, whereas now it is apparent the National Transitional Council will be handling the issue. The National Transitional Council will organize the issue amongst themselves. They were working on a ministry basis, now that dialogue will only intensify."
FAIR'S TO CONTINUE
Metin Çıplak the General Coordinator for Libya's largest fair operator Senexpo states that recent developments are on a positive course. Informing that the National Transitional Council will become the new center for problem-solving, Çıplak states, "Both sides approach one another with good intentions. We are expecting a serious period of stability to come within the next six months. The fairs held between both countries will also pick up where they left off."
300 MILLION DOLLAR SUPPORT FOR NEW ADMINISTRATION
Turkey has set aside 300 million dollars of aid to Libya. Of this figure, 100 million dollars are in grants, whereas 200 million dollars is planned to be credit. Foreign Affairs Minister Ahmet Davutoğlu explained during a meeting with Libya's National Transitional Council Chief Mustafa Abdel Jalil in Benghazi yesterday, that some of the funds have already begun to make their way to Libya. Abdel Jalil also stated that the fact that yesterday's trip was the second time Davutoğlu had visited Benghazi within a month is evidence of Turkey's support.