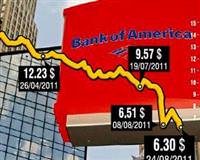 Bank of America Corp (BAC.N) shares fell to their lowest level in 2-1/2 years on Tuesday on growing concerns that the largest U.S. bank will have to raise massive amounts of capital.

In recent weeks a number of analysts have suggested the bank will need to boost capital by about $50 billion to meet new global capital standards and as it faces huge liabilities from its deeply troubled home mortgage business.

But on Tuesday a blog post by former securities analyst Henry Blodget upped the ante. Blodget, who set up and now runs the Business Insider website, said the bank could face $100 billion to $200 billion of write-offs and other balance sheet problems, and be forced to raise as much in fresh capital.

Raising such a large amount of capital would be very difficult for the bank, given it has few large assets that aren't central to its business left to sell and as its share price has sunk to a level where a large stock offering would be prohibitively expensive.

Bank of America shares closed 1.9 percent lower at $6.30 after falling as much as 6.4 percent at one point, making it the fourth worst-performing stock in the S&P 500 on a day when the markets rallied.

The shares have now lost nearly 53 percent since the beginning of the year, reducing its market cap by more than $70 billion. The cost of insuring the bank's debt against default also spiked to record levels at one point.

The size of Bank of America, which had to be rescued by the U.S. government in the financial crisis, presents a particular headache for regulators as it touches almost every aspect of the U.S. financial system.

Bank of America fired back at Blodget, calling his claims "exaggerated and unwarranted," echoing language the U.S. Securities and Exchange Commission used in a 2003 complaint against Blodget.

Blodget, a former Internet analyst at Merrill Lynch, was barred from the securities industry as part of a settlement with the SEC over alleged conflicts in his research.

Bank of America said the exposures that Blodget identified as the source of possible losses were inaccurate, with his sovereign exposure being off by a factor of 10.
The bank says it can reach target capital levels by selling assets and earning more money. The bank has some time to comply with the Basel III capital rules, which are to be phased in from 2013 through 2019.

Some analysts agree. Rochdale Securities analyst Dick Bove told television news outlets on Tuesday that Bank of America does not need to raise capital, whatever happens to its share price, and that the bank has ample liquidity.

Chief Executive Brian Moynihan told investors on a recent conference call that the bank did not view issuing more shares as an option, after having already diluted its shares so much during the financial crisis.

Some analysts have suggested the bank will need to raise capital if the proposed $8.5 billion settlement over Countrywide Financial Corp-created mortgage-backed securities falls apart.

Outside investors have been pushing for the bank to repurchase toxic mortgages from the securities, amid allegations the loans do not meet initial guarantees made when the securities were bought, and now total $100 billion in unpaid principal.

Others said pressure on the bank is increasing the chances of a capital raise.

In a note to clients, JPMorgan Chase & Co analysts upgraded Bank of America's stock to neutral from underweight, on the belief the declining stock price and rising debt insurance costs will force a capital raise.

"We think it is getting more difficult for management to ignore this sentiment," JPMorgan Chase analysts Kabir Caprihan and Matthew Hughart said in a research note.

At a news conference on Tuesday, the Federal Deposit Insurance Corp's acting chairman said he is comfortable with the overall amount of capital at U.S. banks.

"As a general matter I would say the answer to that is yes," Acting Chairman Martin Gruenberg said in response to a question about the amount of capital banks are holding. [ID:nN1E77M16B]

The drop in the bank's shares on Tuesday was their fourth consecutive daily decline.

Credit default swap insurance on the bank's unsecured debt jumped as much as 65 basis points to 435 basis points before retracing to 385 basis points, meaning it would cost $385,000 per year for five years to insure $10 million in bonds, according to Markit.

The level is just below the record level of 386 in March 2009, Markit data show.

Traders said weakness in credit derivatives helped fuel downward pressure on the shares as markets feed off each other. Bank of America shares closed Tuesday at levels not seen since March 2009.

The key arteries of the financial system -- the ability of banks and other institutions to borrow from one another on a short-term basis -- continued to show rising stress on Tuesday, but not at levels associated with the panic of 2008.

The cost for a bank to borrow from another bank for three months in U.S. dollars, known as the London Interbank Offered Rate or LIBOR, continued to rise, hitting 0.31178 percent Tuesday morning from 0.30300 on Monday.

The pressures were most acute at European banks, which continued to pay more than other banks for short-term funding. Most European institutions paid more than the LIBOR fixing.