Ülker takes on a Japanese partner 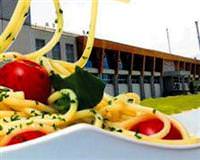 Japanese giants Mitsubishi are soon to become partners with Ülker. Joined by shareholder company Nissin, Mitsubishi will be purchasing 50 percent of Piyale. With their new partners, Ülker will produce noodles to sell to Japan.

Ülker is soon to be partnered by one of the biggest companies in the world. Japan's Mitsubishi will be joining forces with Ülker to produce noodles. Mitsubishi and shareholder Nissin have shaken hands on a deal for Piyale, Turkey's first ever pasta producers, which Ülker purchased a year ago. The Japanese partners will purchase 50 percent of the brand. The first step towards securing this partnership was taken last week. According to the information obtained, Ülker, having received approval for the transaction from the Competition Board, will be signing the agreement with its Japanese partner in the next few days. Ülker has partnered with a number of European and American companies in the past, however this will be the first time they produce with a Japanese firm. Established prior to the founding of the Republic, the Piyale brand has always been identified with the Sabancı Group. Three years ago Piyale left Sabancı Holding, going first to Marsan and then last year was purchased by Ülker's head company Yıldız Holding. The Piyale brand, which is Turkey's largest pasta products producer, closed their facilities in Izmir and moved on to Izmit and has now become one of the most modern producers in the sector.
MAKING NOODLES
According to the information obtained, the partnership will consist of three companies. In addition, to Ülker and Japan's Mitsubishi, Nissin Food will also be involved in production. The Japanese have supposedly set aside approximately 100 million lira for this operation. Future investments include increasing capacity in the Piyale brand's manufacturing facility. Ülker's new Japanese partner Nissin is the largest noodle producer in the world and their experience will be reflected on production.
PASTA EXPORTS TO JAPAN
Supposedly the most significant factor in Japan's Mitsubishi and Nissin's selecting Ülker is its strong presence in the Middle East, Africa and European markets. Sitting down to the table with the Japanese for the first time, Ülker will also conduct sales to Japan, which imports 30,000 tons of pasta products annually. Ülker's partner Mitsubishi most recently became partners with the car rental company Intercity. With 612,000 employees, Mitsubishi is Japan's largest energy, iron and steel, chemicals, automotive and electronic company. This new collaboration will add Japan to Ülker's map of international partnerships, in the past, Ülker has joined forces with other mega firms including Hero Baby, Laurens Spethman Holding, Kellogg's and Eckes-Granini Group and last year increased their international partnerships by signing agreements with Holland's Ice Cream BV, Germany's Eckes-Granini for fruit juice as well as the United States spice company McCormick.