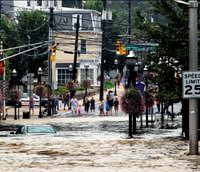 The governor, who scouted the damage by air with Homeland Security Secretary Janet Napolitano and Agriculture Secretary Tom Vilsack, said the financial hit would rise by millions of dollars once agricultural losses were factored in.

"This has become an expensive hurricane for North Carolina," Perdue told reporters.

A final damage estimate is expected next week, she said.

Perdue said she requested a federal disaster declaration for those seven coastal counties.

She also asked state transportation officials to find a short-term solution to open a highway on the Outer Banks that was broken up at several points by the storm, cutting off Hatteras and Ocracoke islands from the mainland.

The governor said overall power outages had dwindled to 138,000 customers, down from a high of more than 600,000, and 13 shelters housed about 850 evacuees overnight.

Progress Energy said 44,500 customers in North Carolina remained without power at noon, down from about 280,000 who experienced outages at the storm's peak Saturday afternoon.

More than 440,000 Progress Energy customers lost power at some point due to the hurricane. Thousands more faced additional outages after strong winds and lightning hit the eastern part of the state on Monday night.

The company said it expected to have 96 percent of affected customers back in service by midnight.

Dominion, another utility, said it was on track to restore power by Friday evening for 90 to 95 percent of its 1.2 million customers whose service was affected in Virginia and North Carolina, and for nearly all customers in the areas with the worst damage from Irene by the end of Saturday.

The company still had 335,000 customers without power in the two states on Tuesday, Virginia Governor Bob McDonnell told reporters.

"Millions and millions," he said.

Though a state official earlier in the day said the threat of flooding from the Blackwater River was gone, McDonnell said the river was due to crest on Tuesday night in Franklin and could cause moderate flooding.