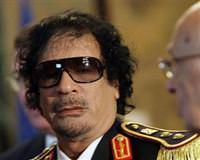 Gasoline shortages in east Libya are at their worst since the uprising against Muammar Gaddafi began, residents said on Wednesday, even as international traders and suppliers rush fuel cargoes to the country.

Shortages have been rare in rebel-held areas until now due to regular supplies from countries such as Qatar and Turkey. Trader Gunvor said on Wednesday it was supplying diesel to help generate electricity.

But after the capture of Tripoli earlier in August, much of that supply has been diverted to west Libya.

Still, drivers in the east were in good spirits and brushed off the inconvenience.

"It's not a big deal. We want to get gas to Tripoli. That's the real problem. Maybe after a few days this problem will finish," said Fathi, 30, pushing his white sedan in line at a station after it ran out of petrol.

Mustafa el-Huni, an oil official within the government of the interim National Transitional Council, said that at least two cargoes of fuel were on their way to east Libya.

"By Saturday we should get more vessels. It's a matter of scheduling. We may take them to other terminals besides Benghazi to facilitate unloading," he said.

Even before the war, the country was forced to rely on imports of gasoline, but refinery outages due to damage and lack of crude supply has increased local demand for imports.

In a petrol station in central Benghazi, 52 cars were waiting in a line for petrol in the otherwise deserted streets, while most residents were indoors for the Muslim holiday Eid al-Fitr to mark the end of the holy month of Ramadan.

Residents also reported closures at other stations and hoarding.

"It's the first time we have to wait, but we don't mind. It should only take an hour," said Mohammed, a Chadian jeweler working in Benghazi.

Libya has subsidized petrol prices, so that prices don't spike when there are shortages. So long as the residents are willing to wait, they can fill up their car for around 7 Libyan dinars or about $5 dollars.

"It's no problem. We are a petroleum country. We have lots more underground," said Nagi, an airline steward. "And now Gaddafi has gone, the money from oil will come to us."

A manager at the petrol station, Mohammed Faruj, said he expected a delivery to arrive on a tanker from the United Arab Emirates later on Wednesday to replenish local supplies.

"Yesterday there wasn't much gas, but it was just one day. A tanker arrived today, so everything should be fine."