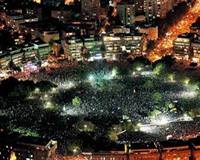 Hundreds of thousands marched Saturday for lower living costs in the largest such rally in Israel's history, bolstering a social change movement and mounting pressure on Prime Minister Benjamin Netanyahu to take on economic reform.

Protest leaders called it "the moment of truth" for the grassroots movement that has swollen since July from a cluster of student tent-squatters into a countrywide mobilization of Israel's middle class.

"An entire generation wants a future," read one banner as demonstrators flooded the streets of Tel Aviv, Jerusalem and cities throughout Israel, shouting "the people demand social justice."

Netanyahu has warned he would not be able to satisfy all the protesters' demands, ranging from tax cuts, to expansion of free education and bigger government housing budgets.

Organizers said over 450,000 people took part in the demonstrations. Police put the number at least 300,000.

Protests on that scale in Israel, with a population of 7.7 million, are usually held over issues of war and peace.

"Tonight is the pinnacle moment of a historic protest," Amir Rochman, 30, an activist from Israel's Green Party said.

"Israel will no longer be the same," Itzik Shmuli, head of the National Student Union and one of the protest leaders said at the rally. "Our new Israel demands real change in the priorities of its government."

Though the turnout was lower than the ambitious one million some had hoped for, commentators said the movement had made its mark on Israel by catapulting the economy onto a political agenda long-dominated by security concerns and diplomacy.

Social media also played a role in the Israeli protests, inspired partly by the impact of Arab Spring demonstrations.

Since it began, the popular movement has upstaged a diplomatic face-off with the Palestinians for U.N. recognition of statehood and has posed the greatest challenge yet to Netanyahu, halfway into his term.

Although Israel enjoys a low 5.5 unemployment rate and a growing economy, business cartels and wage disparities have kept many from feeling the benefit. Many protesters come from the middle class which bares a heavy tax burden and sustains the conscript military.

The weekly protests prompted Netanyahu to set up a committee to explore a broad revamp of economic policies. The government has also announced housing and consumer market reforms.

Protest leaders have indicated they will pause demonstrations in the coming weeks until the committee submits its conclusions. But Shmuli said at the rally that the movement was "here to stay."

"Priorities must be set, one thing comes at the expense of another," Roni Sofer, a spokesman for Netanyahu, told Israel Radio Saturday, adding that the government would not break its budget.

Netanyahu's governing coalition faces no immediate threat, but the protests have underscored the potential electoral impact of a middle class rallying under a banner of "social justice."