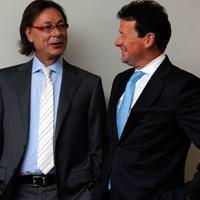 Former BP boss Tony Hayward has returned to the oil business with an agreement to acquire Turkish explorer Genel Energy via a reverse takeover to create a Northern Iraq-focused group worth $4 billion.

Vallares , an investment vehicle set up by Hayward, financier Nat Rothschild and banker Julian Metherell, is buying Genel in a deal that exposes investors to political uncertainty over internal Iraqi politics and corporate governance concerns.

The enlarged group -- which will likely be big enough to enter the FTSE 100 index of blue-chip London-listed companies -- will be known as Genel Energy Plc and Genel's existing shareholders will own half of it, Vallares said on Wednesday.

The founders could be in for additional payouts if the new venture is a success, due to their entitlement to additional shares if the company's shares rise above a threshold of 25 percent in the four years.

Hayward's stake represents almost twice what he was paid for his three years as CEO of BP, which he left after the company's blown-out Macondo well caused the U.S.'s worst ever offshore oil spill, and after he inflamed public opinion with a series of comments, including saying he would like his "life back".

Separately on Wednesday, BP said it had found more oil at its Mad Dog field in the Gulf of Mexico.

The use of reverse takeovers to give fast-track London Stock Exchange listings to emerging market groups has been criticised for posing corporate governance risks and devaluing the cache of an LSE listing.

The choice of Genel as a partner is especially controversial.

Sepil was given a record fine last year by Britain's Financial Services Authority for insider dealing.

Two other executives were also fined in the case, which involved trading in shares of Heritage Oil, a partner in one of Genel's fields.

Vallares chairman Rodney Chase said the Turkish side had since come up to speed on norms in the London market.

"The London governance framework has been embraced with complete enthusiasm," he told reporters on a conference call.

While Iraq paid Genel and other operators in Kurdistan for oil produced in the first quarter, there is no final agreement on how oil revenues will be allocated and companies are still awaiting payments for the second quarter.

Nonetheless, Hayward told reporters he looked forward to expanding in the region. "We expect to participate as a major player in any future consolidation in the region".

The deal will see Vallares issue new shares worth $2.1 billion at 1,000 pence apiece.