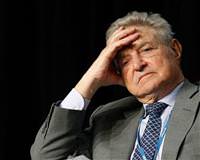 Soros, in an article for the New York Review of Books and Reuters.com, says policymakers must prepare for the possibility that Greece, Portugal and perhaps Ireland will have to default and leave the euro zone.

"It appears the authorities have reached the end of the road with their policy of 'kicking the can down the road'," he says.

"Even if a catastrophe can be avoided, one thing is certain: the pressure to reduce deficits will push the euro zone into prolonged recession. This will have incalculable political consequences."

A growing number of policymakers, as well as market economists, are convinced it is a matter of time before Greece, which keeps falling behind on its fiscal targets after two EU/IMF bailouts, will have to default.

Italy and Spain have come under pressure from bond markets over their large public and bank debts and weak growth, a cause for particular concern as both economies are too large to be saved by the European rescue fund that has been used in bailouts for Greece, Portugal and Ireland.

As well as preparing for a default and euro zone exit by those three "peripheral nations", Soros recommends four bold policy measures:

- Bank deposits have to be protected to prevent bank runs in weaker states;

- Some banks in the defaulting countries have to be kept functioning to keep their economies afloat;

- The European banking system would be recapitalised and put under European-, as distinct from national-, supervision;

- Government bonds of other deficit countries would have to be protected.

"All this would cost money," writes the 81-year-old hedge fund manager and philanthropist. "There is no alternative but to give birth to the missing ingredient: a European treasury with the power to tax and therefore to borrow."

Soros acknowledges that such a move would require a new European Union treaty and be deeply controversial, especially in Germany, where there is strong opposition to underwriting the debts of what are seen as profligate southern European nations.

The German public still thinks that it has a choice about whether to support the euro or to abandon it. That is a mistake," he writes.

"The euro exists and the assets and liabilities of the financial system are so intermingled on the basis of a common currency that a breakdown of the euro would cause a meltdown beyond the capacity of the authorities to contain.

"The longer it takes for the German public to realise this, the heavier the price they and the rest of the world will have to pay."