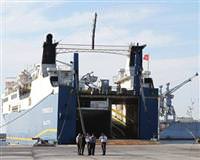 From his window on the corniche of Syria’s Mediterranean port city of Tartous, an international shipper bemoans the change since a popular uprising six months ago engulfed the country and dealt a heavy blow to its economy.

"At night, ship lights made Tartous extend into a city on the sea; now it's like a small village. The port's sea line was full of vessels - now the berths are nearly empty," said the shipper, who opened an agency in Tartous to cash in on a boom in traffic after the Iraq war wound down.

Street protests demanding the removal of Syria's President Bashar al-Assad, many of them bloodily suppressed, have shrunk traffic at the country's ports and damaged its hopes of capitalizing on its position as a Middle East crossroads to grab a bigger share of transit business.

The exact extent to Syria's economy is being hurt by the unrest and resulting international sanctions is not clear; official data is scarce. But many analysts expect gross domestic product to decline this year, perhaps by several per cent or more. At the start of this year, the International Monetary Fund predicted it would grow 3 per cent.

Shippers and businessmen say exports have dropped as foreign customers have cut orders, while Syrian importers have delayed orders because of the uncertainty. Meanwhile, companies which used Syria as a conduit to conduct trade with other countries in the region are seeking different routes. Syria's principal port of Latakia, where the military deployed three months ago, has been hit hard along with Tartous.

"Even the Mediterranean cruise liners that came to Latakia and Tartous, and had hundreds of Italian and Spanish tourists, have not come this year," said the international shipper, who did not want to be named because of the sensitivity of the issue.

Shipping sources say traffic in general cargoes, dry and liquid bulk cargoes, and containers at Latakia and Tartous has been slipping since the uprising broke out in March. They estimate volumes shrank an average 35 to 40 per cent from a year earlier in the first eight months of 2011.

"Importers and exporters are being very cautious, and that has led to imports of raw materials falling sharply as production slows down in many industries due to the troubles," a Syrian transportation official, who requested anonymity, said from Damascus.

Shipping agents and industry experts said container volumes, the vast majority of which are handled by Latakia, dropped in June alone by 36 per cent from a year earlier to 33,527 twenty-foot equivalent units (TEU).

Official Latakia port figures for the April-June period show a drop of 16 per cent from a year earlier, but industry sources said this data was misleading because it included many containers with empty space.

In Tartous, which handles most of Syria's bulk cargoes, or nearly nine million tonnes of annual traffic in normal times, shipping sources said some European operators were avoiding the port after the European Union announced sanctions on Syrian oil exports at the start of September.

They said they were also seeing less business from Iraqi and other Arab traders who were deterred by the increasing checkpoints and roadblocks in many parts of Syria.

"We had 25 to 30 vessels daily arriving. This has dropped to between five to 10 daily," said a major shipping agent based in Tartous, referring to vessels between 8,000 and 35,000 tonnes.

Shipping agents say the companies are reluctant to pull out of a transit market that has served the whole region and still has great long-term potential because of its location.

"No major regular shipping lines are quitting at the moment. Once they withdraw from any service, it's very hard to restore," said Talal Halawani, a shipper whose Amman-based Liberty Shipping is an agent of a leading Italian line.

"Although they are suffering because cargo is not like before, they are still operating normally despite all the constraints. It's a wait-and-see attitude."

But other regional companies with no regular services have less ability to sustain losses, and they have omitted port calls or cancelled visits to Syrian ports altogether.

"Liners that made container ship calls four times a month are now calling three times a month. Some regional liners, including one or two Turkish liners, have even dropped port calls altogether," said a second Syrian transportation official.

Some shippers are seeking to offset the drop in their Syrian trade by offering more competitive rates for container slots in nearby Beirut, Mersin and Alexandria ports, which are in the same Europe-Mediterranean service.

The turmoil has prompted many lines to suspend plans, some drawn up only a few months ago, to add more container slots or introduce bigger vessels on Syrian port calls in anticipation of demand related to the reconstruction of Iraq.

Over the past five years, Syrian ports were able to boost their transit trade with Iraq, Jordan and the Arabian peninsula as Syria's red tape and state controls, a legacy of five decades of Soviet-style economic management, were reduced.

Latakia and Tartous were also revitalized by the award of contracts to manage their container terminals to foreign investors in partnership with local investors linked to the Assad family.

The foreign investors - CMA CGM in Latakia, and the Philippines' International Container Terminal Services in Tartous - upgraded the facilities and helped to nearly double the ports' container traffic last year to 620,000 TEU from around 365,000 TEU in 2004.

Nearly 40 per cent of Latakia's total incoming cargo volume has been Iraq-bound, shippers and Syrian transportation officials say, while for Tartous the figure has been as high as 70 per cent.

Syrian ports' flexibility and lower costs gave them a competitive advantage in Iraq-related business against Turkish and Lebanese ports and Jordan's Aqaba. Lower land transport costs were also a plus, along with the ability to bypass Suez Canal fees paid by importers using Jordanian and Saudi ports on the Red Sea.

Now, Iraqi, Jordanian and Saudi Arabian importers, who have used Syrian ports in recent years for bulk cargoes of wood, marble, steel and grains from the Black Sea area and North and Central Europe, are looking for alternatives.

"We are getting increasing inquiries from local and Iraqi traders who want to bring their goods to Jordan by sea from Turkey or other markets. This business traditionally would go to Syrian ports. Even goods that would normally go by land via Syria are now being shipped," said Captain Wahid Abu Ajamieh, general manager of CMA CGM Jordan.

"This is an indication that something odd is happening."