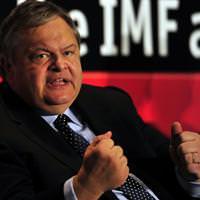 Hours before a telephone conference between the Greek Finance Minister and senior officials of the European Union and the International Monetary Fund, the IMF representative in Greece spelled out steps Athens must take to secure a vital 8 billion euro rescue payment next month.

"The ball is in the Greek court. Implementation is of the essence," Bob Traa told an economic conference.

Additional savings measures were needed to cut the public deficit to a sustainable level and reduce the public sector's claim on resources -- code for axing jobs and cutting pay and pensions -- while improving tax collection rather than adding further taxes, he said.

European stocks and the euro fell sharply on fears of an early Greek default, the failure of EU finance ministers to agree new steps to resolve Europe's debt crisis at weekend talks, and another regional election defeat for German Chancellor Angela Merkel.

In signs of mounting stress, the risk premium investors charge to hold Italian or Spanish bonds rather than benchmark German Bunds rose further above 5 percent despite six weeks of European Central Bank buying in an effort to stabilize them. The cost of insuring peripheral euro zone debt against default also rose.

The Greek cabinet was due to meet after the teleconference with the IMF/ECB/EU "troika", pushed back to 1600 GMT, to discuss further austerity measures to make up for a fiscal shortfall.

Prime Minister George Papandreou canceled a planned trip to Washington and the United Nations at the last minute and returned home on Saturday in response to the crisis.

Greek media published a list of 15 austerity measures it said the troika was demanding the Socialist government implement to receive the next tranche of aid.

The IMF's Traa acknowledged that the IMF/EU bailout program lacked public support and said there was plenty of goodwill to give Greece more time for its adjustment program in a weaker than expected economy.

Finance Minister Evangelos Venizelos said the economy was set to contract by 5.5 percent this year after 4 percent in 2010. Cutting spending would be a priority of the 2012 budget, he said.

Asked whether Greece would get the next installment crucial to pay salaries and pensions in October, Venizelos told Reuters: "Yes, of course."

Even if it does, many economists and investors believe Athens will have to default on its debt mountain -- more than 150 percent of gross national product -- within months.

Former IMF managing-director Dominique Strauss-Kahn joined this chorus on Sunday, saying in a French TV interview that Greece's debt must be reduced, and government and private creditors should take losses now rather than playing for time.

"(EU) governments are not solving things, they are kicking the problem down the road, and the snowball is growing and making the problem bigger and bigger," he told TF1 television.

Uncertainty over Greece was compounded by another political shock in Germany at the weekend.

The sixth regional election defeat this year for Merkel's center-right coalition on Sunday raised questions about the stability of her government and her ability to push through more euro zone rescue measures.

Her Free Democratic (FDP) junior coalition partners crashed out of the Berlin regional assembly with just 1.8 percent of the vote, raising pressure from some party activists to take a more Eurosceptical line.

Although the Berlin regional vote ended a cycle of seven state elections this year, it appeared to leave the cautious Merkel with less room for maneuver to take bold action in defense of the euro.

Leaders of both the Bavarian Christian Social Union (CSU) and the FDP have raised the prospect of Greece defaulting and having to leave the 17-nation single currency area, ignoring rebukes from the chancellor for alarming markets.

One of his predecessors, Lawrence Summers, said in a Reuters column on Sunday that all nations should pressure Europe to go beyond "grudging incrementalism" to recapitalize banks, and revive economic growth.

"In normal circumstances comity would require deference by others to European authorities on the resolution of European problems. Now when these problems have the potential to disrupt growth around the world all nations have an obligation to insist that Europe find a viable way forward," Summers wrote.