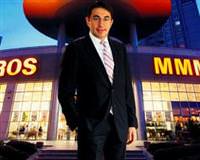 After selling the discount market Şok to Gözde Finansal and Bizim Toptan, Migros has decided to further develop their supermarket concept. With plans to grow their Mjet markets in lieu of Şok, the firm will open two markets a week and will create 4,500 employment opportunities a year.

Migros is now focused on growing their supermarket concept, with Tansaş seen advancing in the Aegean and Mediterranean and choosing to sell the discount market Şok for 600 million lira to Gözde Finansal and Bizim Toptan.
Migros General Manager Özgür Tort states "With the 600 million liras incurred from the Şok sale, Migros Group has plans for growth. Last year, the Şok markets annual revenue was at 1.2 billion liras. By the end of 2012, we plan to make up the difference and surpass it." Explaining plans to open two stores a week in 2012, thereby creating employment opportunities for 4,500 people, Tort states that a shopping basket in a discount store fills up to equate to seven to ten lira, whereas when a supermarket basket fills, the total cost of the items is between 20-30 lira and therefore they intend to stick with the supermarket format.
According to Tort, Migros' annual revenue showed 34 percent growth in the first half of the year. Tort explains that after the Tansaş transformation a significant portion of the company's growth was derived from Anatolia.
NO SPEED LOST IN THE MARKET
Expressing that they are not expecting to be affected by the anticipated regression of growth in Turkey in the second half of the year, Tort states, "I do not think there will be a serious disruption in momentum in the second half of the year. Our government has made significant stride in their current budget deficit efforts making decisions after decision. Once we come out of this period unharmed, we may then observe the future as being much more successful." Tort also mentioned that he foresees organized food retail will see an eight to nine percentile growth over the entire year.

A SUPERMARKET SQUEEZED INTO MJET
Tort also explains that they have squeezed 3,200 products into each 150 square-meter M-Jet, which has allowed them to have an increased presence in neighborhoods and on streets. Tort states that according to world standards, a hyper market would house 25,000-30,000 products, large supermarkets 12,000 to 15,000, small markets 3,000 to 8,000 with small shops and discount stores holding between 600 and 1,000 products.

NOSTALGIA WITH MIGROS TRUCKS
Drawing attention to the fact that on Facebook, in terms of brands with the 'highest interaction' they have become the world's top fifth and first in Turkey. Tort also states that jet registers have seen ten million transactions until now and goes on to explain that with "good agricultural practices" they have filled their customers' baskets with 170,000 tons of healthy vegetables and fruits. Özgür Tort also announced that in honor of Migros' 57th year, they will be distributing symbolic Migros sales trucks throughout the city, which will greet customers and provide sales of products in packaging from fifty years back.