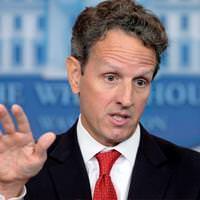 Treasury Secretary Timothy Geithner on Thursday said that the European debt crisis and the political divisions in the United States were the biggest threats to the global economy.

"The two other clouds still over us are the European crisis and the deep concern that you can see across the world and around the country about whether the political system in the United States is up to the challenges we face," Geithner said before weekend meetings of the International Monetary Fund and the World Bank in Washington.

"Not just the near term challenges of supporting an economy still healing from crisis, but long-term challenges of growth and competitiveness and fiscal sustainability," he told an event sponsored by the National Journal news publication.

Geithner will meet with his counterparts from the Group of 20 economies on Thursday evening where discussions about the European crisis and its impact on market confidence will be the focus.

Finance ministers from around the world are pressuring Europe to do more to contain the escalating debt crisis that has rattled global markets and the European financial system.

Geithner, who has traveled to Europe twice in the last two weeks to deal with the crisis, voiced confidence in the European Union's ability to do so.

"They recognize that if you let, as the United States did in the early part of 2008, the momentum of these concerns build, they're very hard to arrest, much more expensive to arrest," Geithner said. "So you're going to see them act with more force in the coming weeks and months," he said.

The IMF has warned that the crisis has increased European banks' exposure by 300 billion euros and has been pushing for a recapitalization so that they can weather any potential losses.

Geithner has privately urged euro zone finance ministers to leverage the European bailout fund to give it greater capacity to handle the bloc's problems.

"I am very confident they're going to move in the direction of expanding the effective financial capacity of that set of financial ring fences because they have no alternative and they recognize that and they're going to do it," he said.

"They're just trying to figure out how to get there in a way that is politically attractive."