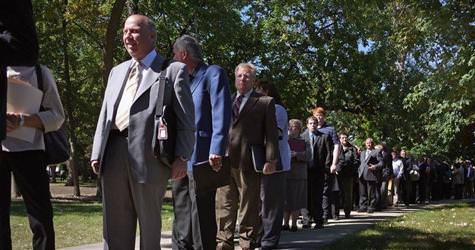 G20 labor ministers meeting on Monday and Tuesday in Paris face the tricky task of trying to boost job creation in the face of a fast-deteriorating economic outlook without undermining already strained public finances.


With a new global downturn brewing, the Group of 20 economic powers are still 20 million jobs short of returning to employment levels of before the 2008 financial crisis.

But G20 countries face a worsening in the shortfall to some 40 million jobs from 2012 as governments seem to be failing to maintain a nascent recovery in the job market, the International Labor Organization and Organization for Economic Co-operation and Development wrote in a report published on Monday.

The labor ministers were meeting under France's G20 presidency to share notes on fighting unemployment ahead of a summit in early November of the group's heads of state in Cannes.

The employment outlook is darkening across G20 countries with the OECD forecasting earlier this month that annualized growth would average only 0.2 percent in the final quarter of the year across the Group of Seven most advanced economies.

In light of the fragile employment situation, the ILO and OECD urged ministers to put job creation programs squarely at the top of their agendas, even as governments' finances come under increased scrutiny on financial markets.

Countries with wiggle room in their budgets should not hesitate to step up spending on job-boosting program while those with strained finances should focus on the most cost-effective schemes, the OECD's head of employment policy, Stefano Scarpetta, said.

Hiring subsidies for the most vulnerable workers, apprenticeships for young people and shortened work-times could help soften the blow in a new economic downturn, Scarpetta said.

"With a slowdown in the recovery pace, the short-term outlook of the labor market is not going to get any better," he told journalists ahead of the G20 meeting.

"It's likely that unemployment will not decline significantly in the rest of the year and possibly going into 2012," he added.

Spain and South Africa are the G20 nations hardest-hit by unemployment, with jobless rates of 21.2 percent and 25.7 percent respectively. France, Turkey and the United States trail behind them with unemployment rates of between 9 and 10 percent.

G20 ministers are to focus on youth employment because young workers were already the hardest hit in the last crisis.

Young workers were among the first to lose their jobs in the last downturn and since then job opportunities have been lacking. As a result, youth unemployment levels are twice or three times as high as adult joblessness in all G20 countries.